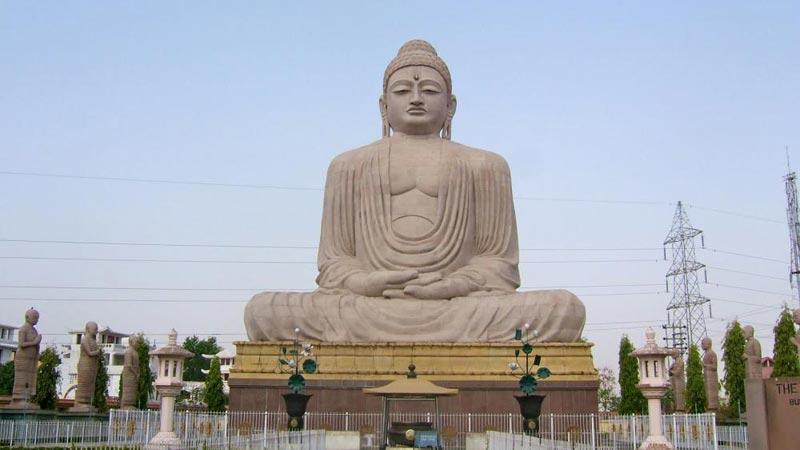 Bodhgaya - As the place of the Buddha's Enlightenment, cis the spiritual home of Buddhists.Lumbini is the birthplace of the Buddha, was located in 1890 after being untraced for 1500 years.Gautama Buddha (c. 563/480 – c. 483/400 BCE), also known as Siddhārtha Gautama, Shakyamuni Buddha or simply the Buddha, after the title of Buddha, was an ascetic (śramaṇa) and sage on whose teachings Buddhism was founded. He is believed to have lived and taught mostly in the eastern part of ancient India sometime between the 6th and 4th centuries BCE. Gautama is the primary figure in Buddhism. He is believed by Buddhists to be an enlightened teacher who attained full Buddhahood and shared his insights to help sentient beings end rebirth and suffering. Accounts of his life, discourses and monastic rules are believed by Buddhists to have been summarized after his death and memorized by his followers. Various collections of teachings attributed to him were passed down by oral tradition and first committed to writing about 400 years later. The Bodhgaya situated near the river Niranjana, is one of the holiest Buddhist pilgrimage centers since it was here that Buddhaattained enlightenment under the Bodhi tree. Nalanda & Rajgir. Rajgir -The picturesque Rajgir, or Rajagriha as it was known in the past (literally, the abode of kings) is surrounded by the meandering river Banganga and 5 hills. During the lifetime of the Buddha this was the capital of the powerful Magadhan kingdom, ruled by the virtuous King Bimbisara. The hills and caves surrounding Rajagriha were home to spiritual teachers, ranging from the materialism of the early Charavaka school to the metaphysics of Upanishadic philosophers. Like many others in search of truth, Prince Siddhartha, after he renounced his royal heritage came to this city to seek the path of vation. Nalanda:-Nalanda was the most renowned university in ancient India. It derived its name from Na-alam-DA, meaning Insatiable in Giving, one of the names by which the Lord Buddha was known. Maya Devi Temple - Lumbini remained neglected for centuries. In 1895, Feuhrer, a famous German archaeologist, discovered the great pillar,further exploration and excavation of the surrounding area revealed the existence of a brick temple and a sandstone sculpture within the temple itself which represents the scenes of Buddha’s birth. On the south of the Maya Devi temple there is the famous sacred bathing pool known as Puskarni. It is believed that Maha Devi took a bath in this pool before the delivery. The temple is built gradually and is composed of many temples, one after the other. It is also found that there is possibility that a Ashoka Stupa existed in the place of temple. The Ashokan pillar - The Ashokan Pillar, essentially erected by Ashoka (249 BC) visited Lumbini and erected an inscribed Ashokan Pillar on the spot of Buddha's birth. The inscription of the pillar (the oldest in Nepal) declares that Ashoka granted Lumbini tax-free status in honor of Buddha’s birth. It is 6m high and half of it is beneath the ground. It is behind the Maya Devi Temple, to the west of the temple. Emperor Ashoka erected many other pillars throughout India. The carved top of the pillar has never been found. The Buddhist monastery - Its built in the way of the modern Buddhist temples of Nepal but is quite important in the purview of architecture of the walls. The middle hall contains some exquisite murals resembling the medieval periods. Kapilvastu - A holy destination related deeply with the life of a legend, Lord Buddha, eventually Kapilvastu is the place where Lord Buddha had lived the childhood and the days of teenage, in complete luxury. The capital of King Shuddhodhan, Kapilvastu still carries with it the mystic charm. It houses many sculptures of Buddhism, which present a landscape before that visitors that makes them feel calm, content. Kapilvastu carries the visitors away to the ancient days when Buddha was a small child, a prince. The place is situated 27 km south of Lumbini. This biography of Gautama Buddha provides detailed information about his childhood, life, achievements, works & timeline.International flight. Medical and insurance of any kind, Monument entrance fee. Any expenses arising out of unforeseen circumstances like flight delay/cancellation/hike in fair, strike or any other natural calamities. Personal nature Expenses i.e. Telephone Calls, laundry, Soft/hard drink, Meals, Tipping etc.