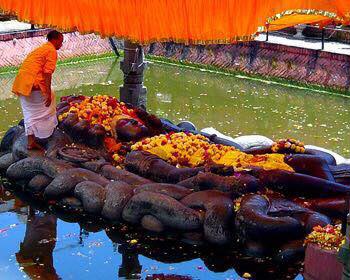 For Infants 2-24 months(2 Years) Please send enquiry.
Charges for children mentioned applies only if they accompanied by 2 adults. If the child is accompanied by single adult full amount will be charged.
Children 2-11 Years will be charged 75% of the tour Cost with full-seat, without extra bed.
Gorakhpur is a city located along the banks of Rapti river in the eastern part of the Indian state of Uttar Pradesh. It is located near the Nepal border, 273 kilometres east of the state capital Lucknow. It is the administrative headquarter of Gorakhpur Districtand Gorakhpur Division. The city is home to the Gorakshanath Temple (Gorakhnath Math). Gorakhpur is one of the most flood-prone districts in Eastern Uttar Pradesh. Data over the past 100 years show a considerable increase in the intensity and frequency of floods, with extreme events occurring every three to four years. Roughly 20% of the population is affected by floods, which are an annual occurrence in some areas, causing huge loss of life, health and livelihoods for the poor inhabitants, as well as damage to public and private property.
Pokhara: is a sub-metropolitan and the second largest city of Nepal as well as the headquarters of Kaski District, Gandaki Zone and the Western Development Region. It is located 200 km west of the capital Kathmandu. Despite being a comparatively smaller valley than Kathmandu, its geography varies dramatically within just few kilometres from north to south. The altitude varies from 827 m in the southern part to 1740 m in the north. Additionally, the Annapurna Range with three out of the ten highest mountains in the world — Dhaulagiri, Annapurna I and Manaslu — are within approximately 15 – 35 miles as-the-crow-flies distance from the valley.Due to its proximity to the Annapurna mountain range, the city is also a base for trekkers undertaking the Annapurna Circuit through the ACAP region of the Annapurna ranges in the Himalayas.
Manakamana Temple: situated in the Gorkha district of Nepal is the sacred place of the Hindu Goddess Bhagwati, an incarnation of Parvati.The name Manakamana originates from two words, “mana” meaning heart and “kamana” meaning wish. Venerated since the 17th century, it is believed that Goddess Manakamana grants the wishes of all those who make the pilgrimage to her shrine to worship her. The Manakamana temple lies 12 km south of the town Gorkha. The temple is located on a distinguished ridge 1,302 metres (4,272 ft) above sea level and overlooks the river valleys of Trisuli in the south and Marsyangdi in the west. The spectacular views of the Manaslu- Himachali and Annapurna ranges can be seen to the north of the temple. The temple is approximately a 104 kilometres (65 mi) drive from Kathmandu and can also be reached via bus east from Pokhara in around three to four hours.
Kathmandu: The history of the city of Kathmandu, which is inseparable from that of the Kathmandu valley, dates back to ancient times. Archaeological explorations indicate that Kathmandu and the two other sister towns in the valley were the oldest towns and are traced to the period between 167 BC and 1 AD. Excavations conducted at Hadigaon and Lubhu in southern part of the valley, in Kathmandu, have unearthed brick walls and Stone Age tools. In 1992, workers digging a trench for the foundation of a house in Maligaon in Eastern Kathmandu discovered a life size (171 x 49 cm) standing male figure carved in pale sandstone, clearly made in the Kushan style. The sculpture was donated by an early Licchavi or pre-Licchavi monarch, named Jaya Varman with an inscription on the pedestal. Although the identity of the figure is contested, it is the authors opinion that it is likely Jaya Varman himself who is portrayed. It is the oldest known inscription from the Kathmandu Valley. "The inscription on this sculpture, clearly dated to samvat 107, most likely corresponding to AD 185, provides this previously missing evidence, and pushes back the epigraphical documentation of royal rule in the Kathmandu valley nearly three hundred years.
Lumbin: (Nepali and Sanskrit: the lovely") is a Buddhist pilgrimage site in the Rupandehi District of Nepal. It is the place where, according to Buddhist tradition, Queen Mayadevi gave birth to Siddhartha Gautama in 563 BCE. Lumbini has a number of temples, including the Mayadevi Temple and several others which are still under construction. Many monuments, monasteries and a museum — the Lumbini International Research Institute — are also located within the holy site. Also located there is the Puskarini or Holy Pond where the Buddha's mother took the ritual dip prior to his birth and where he, too, had his first bath. At other sites near Lumbini, earlier Buddhas were, according to tradition, born, achieved ultimate Enlightenment and finally relinquished their earthly forms. Gautama, who achieved Enlightenment some time around 528 BCE, became the Gautama Buddha and founded Buddhism. Lumbini is one of many magnets for pilgrimage that sprang up in places pivotal to the life of Gautama Buddha.
Sunauli is the traditional name given to both sides of this India/Nepal border crossing, 70 kilometers north of Gorakpur and 3 kilometers south of Bhairahawa. Technically the Indian side is "Sunauli" and Nepal side is Belahiya. Both are small, congested, dusty and dirty towns and the quicker you can get on to Bhairahawa (again only three kilometers north)/elsewhere, the better. Sunauli is not a place to linger. But it is an important border crossing/trade point, therefore the traffic and congestion. There are a few travel offices, currency exchange facilities on the Nepal side, and zero sights - unless you count long lines of Indian big-rigs. If you have Indian Currency and are going to Nepal, there's no need to worry about exchanging money to Nepali Currency. Shops/Hotels/Buses in Nepal easily accept Indian Currencies in denominations up to Rs 100. Going from India to Nepal, Nepalese visas are available on arrival. Going from Nepal to India? Hope you have visa already as no visas are available on arrival to India. And neither immigration office is overly helpful.