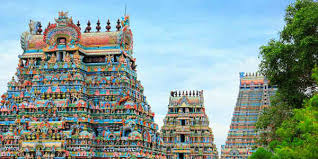 Tamil Nadu s a state in the south-eastern part of the Indian Peninsula. Tamil Nadu is previously a part of the United Madras Province, which was later partitioned based on languages. Tamil Nadu has more than 4,000 years of continuous cultural history. Tamil Nadu has some of the most remarkable temple architecture in the country, and a living tradition of music, dance, folk arts and fine arts. Tamil Nadu is well renowned for its temple towns and heritage sites, hill stations, waterfalls, national parks, local cuisine and the natural environment and wildlife.

Tamil Nadu has the credit of having 34,000 Hindu temples some of which are several centuries old. The cities in ancient Tamil Nadu is believed to have revolved around the magnificent temples built by the Pallava, Chola and Pandya empires and therefore most of the cities in the state have a lot of religious significance and contain a number of temples and shrines in and around their limits. Temple towns like Madurai and Kanchipuram are thronged by visitors throughout the year.

Southindianholidays is a Brainchild of Mr. Martin Alex, Who Laid the Cornerstone of the Company in 2014 with An Aim to Become a Preferred Travel Partner of Its Potential Patrons. Our Company Headquarter is Located in Kodaikanal (tamil Nadu, India). Since Incorporation, We have Been Designing and Hosting Tours to all the Major Tourist Attractions Across India. Our Roots in Destination Management Enable Us to Cater to Varied Requirements of Enthusiast Travelers. Besides, We are Providing Services for Railway Ticketing, Event Planning, Hotel Booking and Car Renting. We Understand Your World of Wanderlust Thus, We Host Tours By Theme and Destinations Covering Kerala and Tamil Nadu. We Offer Theme Tours for Romantic Holidays, Family Holidays, Beach Holidays, Group Holidays, Beach Island Tour, Honeymoon Holidays, Adventure Tour, Pilgrimage /religious Tour, Heritage & Culture Tour, Wildlife Tour, Yoga & Ayurveda Tour and Golden Triangle Tour. Read More...