Khowai is a town in the Indian state of Tripura. This settlement was born in the year 2012 after the bifurcation of the subdivisions of Tripura. This small establishment bears the name of the river that flows through it and has become a well known tourist destination in the Eastern part of the country.

Hoisted 75 feet above the sea level, Khowai unrolls across an area of 1378 sq. km. the major portion of the land of Khowai is a jagged plain and it shares its borders with the neighboring country Bangladesh. The climate of Khowai is subtropical humid in nature. The summers in Khowai are humid with an average mercury level of 33°C and the winters arrive for a shorter period of time. The average temperature during the winter season remains 17°C. Khowai also receives plenty of rainfall with an average of 800 mm annually.

There are different tourist attractions in the district of Khowai. The people that visit Khowai flock to Cherrapunji. Cherrapunji is a bustling city that caters everyone. There are monuments, restaurants, hotels and markets from where the visitors can purchase souvenirs. 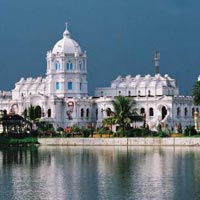