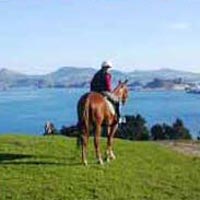 Otago is a region of New Zealand in the south of the South Island. It has an area of approximately 32,000 square kilometres making it the country's second largest region. It has a population of 203,500 from the June 2008 estimate.

The name "Otago" is an old southern Maori word whose North Island dialect equivalent is "Otakou", introduced to the south by Europeans in the 1840s. "Otago" is also the old name of the European settlement on the Otago Harbour, established by the Weller Brothers in 1831.

Major centres of what is now the Otago Region of the old province include Dunedin (the principal city of the region), Oamaru (made famous by Janet Frame), Balclutha, Alexandra, and the major tourist centres Queenstown and Wanaka.

New Zealand's first university, The University of Otago, was founded in 1869 as the provincial university in Dunedin.

Getting Around : Air New Zealand flies from Dunedin to the major centres of Christchurch, Wellington and Auckland.

Top Places to Visit in Otago

All Places to Visit in Otago