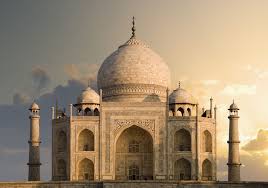 Pick Up from Delhi and Transfer to Agra agra, or the City of the Taj, as It is Known all Over the World, is the Goal of a Pilgrimage to the Creative Best. Craftsmen Who are Descendants of Those Who Worked Under the Mughals Know Agra for Its Superb Inlay Work On Marble and Soapstone. Though Its Political Significance Ended with the Transfer of the Capital to Delhi in 1634 By Shah Jahan, It's Architectural Wealth Has Definitely Secured International Fame for Carpets, Gold Thread Embroidery and Leather Shoes. taj Mahal: taj Mahal Located On the Banks of the Yamuna River is One of the Seven Wonders of the World. the Mughal Emperor Shahjahan as a Memorial Built this Marble Tomb to His Wife, Mumtaz Mahal. agra Fort located On the Banks of the Yamuna 2 Kms. Northwest of the Taj Mahal, Designed and Built By Akbar in 1565 A.d., the Fort Houses the Beautiful Pearl Mosque and Numerous Palaces Including the Jahangir Mahal, Diwan-i-khas, Diwan-i-am and Moti Masjid. akbar's Mausoleum (skiandra) situated About 10 Km from Agra, in the Small Town of Sikandra (4 Km from Agra), this Mausoleum is a Fusion of Muslim Hindu Architectural Style. It Was Started By Akbar But Completed By His Son Jehangir in 1605. mathura, the Holy Birthplace of Lord Krishna mathura, a Little Town On the River Yamuna is Synonymous with Lord Krishna Who is Believed have Been Born Here. Alive with Devotion to Lord Krishna - the Evergreen Hero of Hinduism, the Lover of Radha and Re-incarnation of Lord Vishnu - It Has a Peaceful and Refreshing Air About It. Mathura Without Lord Krishna is like Bethlehem Without Christ. the City of Mathura is Located At a Distance of 145 Km South-east of Delhi and 58 Km North-west of Agra (india). the City Has for Long Attracted Krishna Devotees from Across the World. Even the Casual Visitor Finds the Temples and Monuments Set in Idyllic Environs Refreshing to Core. Places of Interest Include: Jama Masjid, Vishram Ghat, Dwarkadheesh Temple, Archaeological Museum, Mansarovar, Govardhan Hill, Usuma Sarovara and Holy Tirthas. there are 25 Holy Tirthas (bathing Places or Ghatas) in Mathura. Visram Ghata is in the Middle and There are 12 Ghatas South of Visrama Ghata and 12 Ghatas North. the 12 Ghatas in the South Extend to Moksa Ghata. these Holy Tirthas are Mostly Located About 400m South of Visrama Ghata, Almost Right Next to Each Other. Many of the Ghatas are Known Now By Different Names. Asi Ghata, Prayaga Ghata, Chakra Tirtha Ghata, Krishna Ganga, Dhruva Ghata and Visrama Ghata are Still Known By the Same Names .