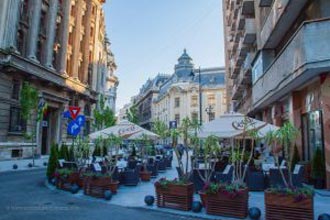 We leave Bucharest and drive north, towards Ploiesti. The city has taken its place in the history of being a home of the first largest oil refinery built in 1857, with the help of USA investment. We will drive further towards the Carpathian Mountains entering Prahova Valley. The main towns of this area are Sinaia, Busteni, Azuga and Predeal. Our first stop will be in Sinaia at the Romanian monarchy summer residence, the Peles Castle. King Carol I has built the castle. The neo-renaissance architectural plans were developed by the German architect Johannes Schultz. Construction started in 1873, the castle was inaugurated in 1883, but all works were finished only in 1914. We leave Sinaia and drive deeper into the valley, to enter Transylvania. Once we rich Predeal, we take the turn towards Bran and Rasnov. Descending the winding roads we arrive in Burzenland (Tara Birsei). Bran Castle is our next stop. It was built in 1388 AD after the King of Hungary in 1377 AD has granted the privilege to construct and secure the mountains passageway linking Transylvania to Walachia to people of Kronstadt (Brasov). We don’t know for sure if Vlad the Impaler lived in the castle. But we know that on his first reign people of Brasov and Bran have been his allies to secure borders against the Ottoman Empire. Rasnov Citadel, built in the beginning of the 13th century by the Teutonic knights with the help of the Saxons living in the area proved to be a stronghold for centuries. During the invasion of the Tartar hordes in the early 1400s along the Brasovia, Burzenland and Rasnov it was the only place to survive. The only problem the citadel was facing was the lack of water. People say that at the first time of the ottoman siege, 2 Turkish soldiers were captured and given the promise to be released if they dig a well. For 17 years they were working and writing verses of Quran on the walls of the well. And finally, we head to Brasov (Kronstadt) or by his latin origin Corona. The discovered traces of humans living in this area are going back to 9500 years BC. The Dacian people lived in the valley and on hills. Ruins of an old roman fort were found by archeologists on the small hill at the entrance to the town. By an invitation of the Hungarian king, German people colonized the area and played a crucial role in developing the city at the times when Europe was under continuous attack from the East. Teutonic knights started building the fortress in 1211. By 1225 crusaders were evicted and only people that arrived with them stayed. As well, Brasov is the home of the first Romanian school. It was built on grounds of the St. Nicholas church and admitted by the Pope in 1395. The remarkable landmark is the gothic Black Church, in the old town, built in the middle of 15th century. In 1839 a 4000 pieces pipe organ was installed and today you can go for weekly concerts.

Adventure Romania is your personal bespoke guide, the perfect introduction to the country. Read More...