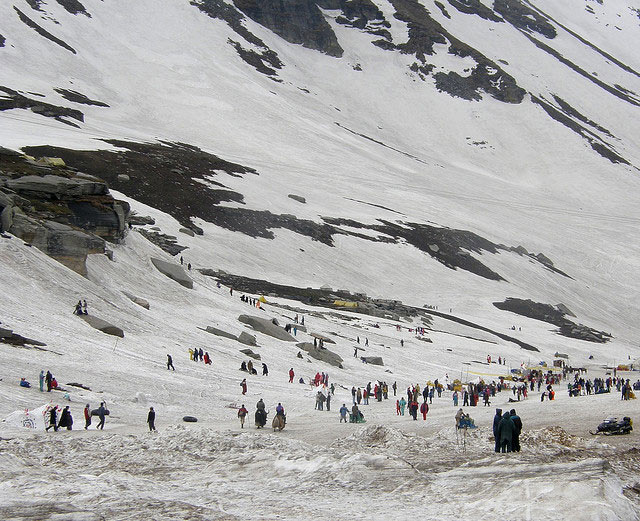 Himachal Pradesh, nestled in the lap of the mighty Himalaya, has some of the most adventurous and attractive trekking routes in the country. The state is bestowed with spectacular snow-clad mountain peaks, and a refreshing mélange of cultures and history. We take you on a trek passing through the breathtaking Dhauladhar Mountains, which rise steeply from the Kangra Valley to a height of 5151m/17,000 feet. Situated on a mountain spur of the Dhauladhar is Dharamsala, the residence of His Holiness the Dalai Lama and the headquarters of the Tibetan Government-in-Exile. More than 8,000 Tibetan refugees live in this area making it a Tibetan enclave in northern India. Along the way you’ll meet nomadic shepherds crossing beautiful mountain passes of the Himalayan range. The trek ends in Brahmaur, the old capital of Chamba, which is studded with ancient castles and historical temples.Medical and evacuation insurance.
Miscellaneous expenses and tipping to the staff.
Alcoholic and non-alcoholic drinks food in hotels.
Air ticket to and from Delhi.
A single room/tent supplement.
Laundry and other services not mentioned in the package. If you need any arrangement Please let us know.

Other Terms & Conditions :
Trek Notes
Important Note: Whilst every effort is made to keep to the above itinerary, clients will hopefully appreciate that this is Adventure Travel in a remote mountain region. There will quite likely be changes to the itinerary in terms of anything from on-the-spot choice of campsite to when a rest day is taken. Weather conditions, road conditions, vehicle breakdowns off the beaten track, local availability of, horses or yaks, can contribute to the need for changes. The Trek guide will do everything in his power to see that you are inconvenienced as little as possible in such circumstances. Timings are approximate.

Meridian Tour & Travels, based in Katra (Jammu and Kashmir), is one of the most prominent companies in the tourism industry, renowned for its excellent services and tour packages. We are offering a range of travel services, to cater to all the travel needs of the clients. The services include Tour Operating Services, Airline Ticketing Services, Rail Ticketing Services Hotel Booking Services, and Car & Coach Rental Services. We are also offering our comprehensive tour packages such as Pilgrimage Tours, Adventure Tours, Golden Triangle Tours, and Heritage & Culture Tour. Read More...