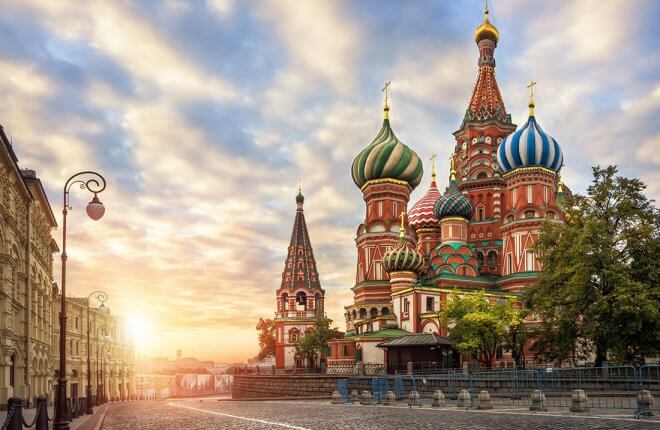 WALKING CITY TOUR AROUND MOSCOW COMBINED WITH NOVODEVICHIY CONVENT — The tour includes the following main streets, squares and places of interest: Tverskaya Street is considered Moscow’s most animated and saucy avenue, the former headquarters of the KGB, the Russian White House, Red Square, the Cathedral of St. Basil the Blessed, the Cathedral of Christ the Saviour, the Bolshoi Theatre, and much more.

The Novodevichy Convent was founded in 1524 by Grand Prince Vasili III in commemoration of the conquest of Smolensk in 1514. It was built as a fortress at a curve of the Moskva River and became an important part of the southern defensive belt of the capital, which had already included a number of other monasteries.

MOSCOW KREMLIN & KREMLIN CATHEDRALS WITH ARMORY CHAMBER AND DAIMOND FUND — The Kremlin has always been perceived as a symbol of power and might of the vast Russian lands. Each era of Russian history left it’s architectural mark on the Kremlin; within the Kremlin walls there are many architectural monuments, churches, cathedrals, museums, etc.

DIAMOND FUND — Is the "richest" museum of Russia. Created by Peter I as storehouse of state regalia, medal signs, smart jeweler ornaments it replenished during all board of a dynasty of Romanovs. Nobody can remain indifferent, having seen nuggets of gold and platinum, such as 36-kilogram " The Large triangle " and 14-kilogram the "Head of a horse ".

CITY TOUR COMBINED WITH ST.BASIL'S CATHEDRAL — The Cathedral of Intercession of Theotokos on the Moat, popularly known as the Cathedral of Basil the Blessed, is a Russian Orthodox cathedral erected on the Red Square in Moscow in 1555–1561. Built on the order of Ivan IV of Russia to commemorate the capture of Kazan and Astrakhan, it marks the geometric center of the city and the hub of its growth since the 14th century. It was the tallest building of Moscow until the completion of the Ivan the Great Bell Tower in 1600.

TRETYAKOV STATE GALLERY — This remains one of the world’s largest museums, a treasure house of old Russian art from the 11th century up through the present. The gallery bears the name of its founder, Pavel Tretyakov, a wealthy Russian manufacturer and patron of art. Now the Tretyakov Gallery holds more than 50,000 works of painting, graphic art and sculpture.

The facade of the gallery building was designed by the painter Viktor Vasnetsov in a peculiar Russian fairy-tale style. It was built in 1902–04 to the south from the Moscow Kremlin. During the 20th century, the gallery expanded to several neighboring buildings, including the 17th-century church of St. Nicholas in Tolmachi.

PUSHKIN MUSEUM OF FINE ARTS — The Museum has been created on the basis of the Cabinet (museum) of Fine Arts and Antiquities of the Moscow University as an educational and public institution where the most important periods of art history from the ancient times to the New Age have been represented.

The Art Gallery has works the most Europe’s greatest painters — Botticelly, Rembrandt, Rubens, Van Dyck and Constable, a vast-selection of French paintings, including works of French impressionists.

MOSCOW METRO AND ARBAT STREET — This is considered the most beautiful underground railway systems in the world. The stations, built in the Stalin era, are remarkable for their bold ornamentation and unique architecture and were created to look like temples and palaces. Most of these stations are decorated with sculptures, glass, colored marble and bronze chandeliers.

ARBAT STREET — Is one of the oldest areas in Moscow and it's the name of the most touristic street in the city. There are always many people wandering around, there are many cafes, restaurants, antiques and souvenir shops.