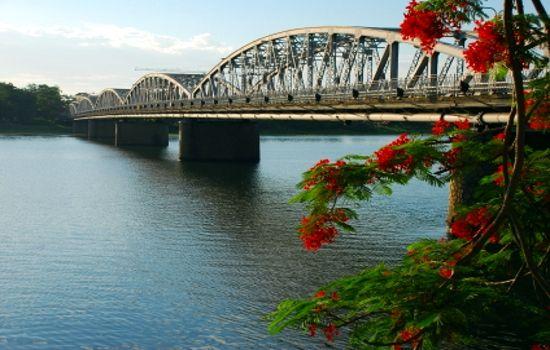 Located in the Red River Delta, Hanoi is the capital of the Socialist Republic of Vietnam. Founded during the reign of King Ly Cong Uan in 1010 AD, Hanoi enjoys a perfect location at he heart of North Vietnam. Come and explore more than 600 pagodas during sightseeing in Vietnam. If you miss visiting the spectacular Hoan Kiem Lake during sightseeing in Hanoi, you miss half the fun! One-Pillar Pagoda : Originally known as Dien Huu (Longevity) Pagoda, One-Pillar Pagoda is shaped as a lotus flower. Legends say that this pagoda was characterized as the symbol of Buddha. It was built by King Ly Thai Tong in 1049. Tran Quoc Pagoda : Known as the cultural symbol of Vietnamese Buddhism, Tran Quoc Pillar was built by King Ly Nam De under the original name of Khai Quoc (National Founder). Originally built on the bank of the Red River, Tran Quoc Pagoda was shifted to the Kim Hgu Islet due river crumbling. Hoan Kiem Lake : Formerly known as Luc Thuy, Hoan Kiem Lake is also called the Restored Sword Lake. This lake has a famous legend story of a sword behind its formation. Do visit the Hoan Kiem Lake during Sightseeing in Hanoi. The West Lake : Also known as Ho Tay, the West Lake was formed due the changes in the course of the Red River. Getto know the famous legends about the West Lake during your Sightseeing Tour in Hanoi. Truc Bach Lake : Formed in the 17th century, Truc Bach Lake was originally called Co Ngu. When you visit the Truc Bach Lake, make sure to have a look at the Truc Lam Palace that built on the site of this beautiful lake in Vietnam. Ha Noi Women's Museum : Ha Noi Women's Museum as the name suggests exhibits events and research library for conference on women's issues. House to more than 3,000 items that are on display, Ha Noi Women's Museum will take you to the historical era of Vietnam. So, do make sure to visit this ancient museum during Hanoi Sightseeing. Hue (Sightseeing) Formerly the political capital of Vietnam from 1802 to 1945, Hue is till date one of the popular tourist attraction of Vietnam. Let yourself be enchanted at the sight of magnificent architecture of the citadels, royal tombs, palaces and temples of Hue during your sightseeing tours in Vietnam. Get to know about the glorious history of Vietnam with a visit at Hue. Thien Mu Pagoda : Thien Mu Pagoda is known as the most famous landmark of Hue. It comprises of a number of living and working buildings for the monks that reside at the pagoda. Not only this there is a bell tower and a seven-tiered monument in front of the Thien Mu Pagoda. Hue Imperial City (The Citadel) : History lovers can't resist visiting the historical Hue Imperial City during Hue Sightseeing. Formerly, the site of the old capitol, Hue Imperial City comprises of a moat and ten ornate gates guarding a palace, beautiful gardens and ancient tombs and temples. Tomb of Tu Duc : Tomb of Duc was built before the death of the Nguyen Dynasty emperor, Tu Duc. It was the final resting place for the emperor. There is a lake, pavilion and a theatre surrounding the tomb that is worth watching during sightseeing in Hue. Forbidden Purple City : Explore the charred remains of the royal family's inner sanctum within the citadel at the Forbidden Purple City in Hue during your sightseeing in Vietnam. Bach Ma National Park : Located 60 km south of Hue, Bach Ma National Park is a home to a wide variety of animals and plants. Spread over an area of 22,031 ha, this national park was created in 1991. It is also known as one of the recognized bio-diversity centres of Indochina. Asiarooms provide information regarding sightseeing in Hue, Vietnam. For more information on Vietnam sightseeing visit the relevant web links on Asiarooms. Hoi An (Sightseeing) Located perfectly on the banks of the Thu Bon River, Hoi An was one of the major trading centers of Southeast Asia. Come and have fun exploring the historical ruins of the Sa Huynh and Champa cultures at Hoi An during your sightseeing tours in Vietnam. Not only this there is much more to watch out for in Hoi An like the romantic Thu Bon River, Cham and Cua Dai Beach. The Tran Family Worship House : Having an influence from the Japanese and Chinese architecture, the Tran Family Worship House is one of the major tourist attractions of Hoi An. Surrounded by a garden and high fences, The Tran Family Worship House was built by a mandarin of civil service named Tran Tu Nhac. This house is divided in to two parts, the first part is used for worship, whereas the second part is reserved for the family. Phung Hung Old House : Built in 1780, Phung Hung Old House is a 3-storey building. The third floor of the Phung Hung Old House was used as a refuge for many families during the flood in 1964. The design of the house was influenced by the Japanese and Chinese architecture. No wonder, this house is worth visiting during sightseeing in Hoi An Vietnam. Japanese Covered Bridge : Located on the west end of Tran Phu Street in Hoi An is the Japanese Covered Bridge. This popular landmark of Hoi An was built in the early 1600's by the Japanese community. Sightseeing in Hoi An is no doubt incomplete without a visit to the Japanese Covered Bridge. Museum of Trade Ceramics : Located at 80, Tran Phu Street, the Museum of Trade Ceramics houses a variety of unforgettable broken pottery. Get to know about the handicraft and culture of Vietnam with a visit at this museum. Various Meeting Halls : Then there are a number of meeting halls in Hoi An that you can visit during Hoi An sightseeing. Cantonese Meeting Hall is located at 176, Tran Phu Street. Hokien Meeting Hall is ideally resting between Tran Phu and Phan Chu Trinh Streets. Chinese All-Community Meeting Hall is located next to the Fujian hall.