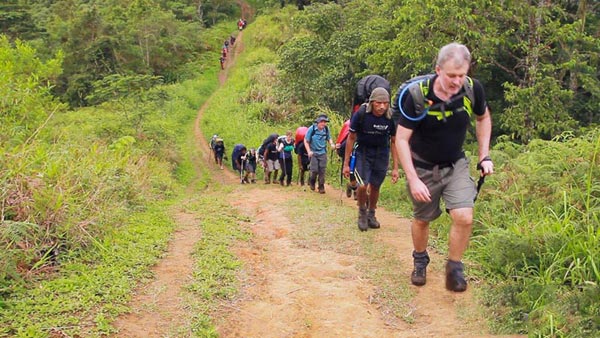 Join an ex-Australian SAS veteran on a once in a lifetime trek to the historic battlefields of Kokoda. Adventure Bound Tours will provide you an authentic experience of this living World War II track. Olly is a modern-day Aussie infantry soldier who served in recent conflicts around the world, including Afghanistan and Iraq. He explains the battles from a diggers’ perspective and gives insights that only a soldier could! Olly also spent time as an instructor at Jungle Training Wing, where he taught Australian and international troops the skills of jungle warfare, which the defence force learnt from campaigns such as Kokoda! We stage our treks in and out of Cairns, a 1 1/2hr flight from Port Moresby! Cairns is a safe city to prepare for the trek and enables people to buy any last-minute equipment or supplies easily. You could also celebrate and enjoy a relaxing stay in Cairns or Port Douglas at the end of your trek! We realise that the history and personal stories of the Kokoda Track are what makes the trek so special, so we don’t skip over the history or walk past important sites, Olly gives relevant briefs at each significant site. We conduct two personal services along the Track, one at Brigade Hill, a major battlesite, and very emotional, as well as at a Dawn Service at the Isurava Memorial, the largest on the track. We are a family run company who are invested in each trekker to ensure you have the best possible experience, you are not just a number! And our local guides and porters are like family and will look out for your every need. They have a great respect and relationship with Olly which comes across throughout the trek. You will also form a strong bond amongst fellow trekkers, and we often have groups continue friendships for years to come. Adventure Bound Tours is known for its high standards and professionalism. Safety is our number one priority. With Olly’s military and emergency services experience, you are in expert hands! Many people trek with us because of a recommendation from past trekkers, which cannot be beaten! The quality of your trekking experience depends larging on your trek guide; Olly will ensure your experience is life changing!

Adventure Bound Tours is a family run business which has developed over the years to be a professional business able to cater for all ages and fitness levels Read More...