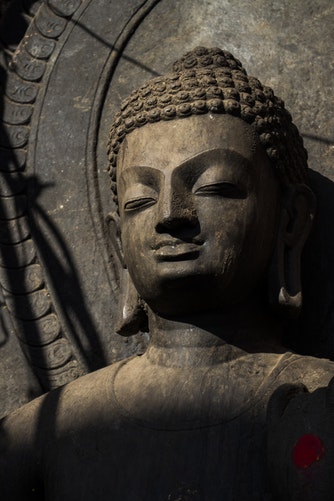 Buddhism - the Second Religious Schism to Emerge from Hinduism Spread to Far Off Places/lands of the World. The Profounder, Buddha Was Born in What is Now Nepal, Achieved Enlightenment At Gaya (bihar) Delivered His First Sermon At Sarnath (up). Before Taking His Last Breath At Kushinagar (deroia, Up) He Traveled Miles Across the Country. Today Its Influence and Popularity are Proof in the Buddhist Sites Dotting the Countryside. However Our Tours are Not Affiliated with Any Particular Spiritual Path. All are Welcome!group Discounts Available On Minimum 10 Paying Paxairfare (delhi-varanasi-lucknow - Delhi) Breakfast On Day of Arrival, Meals, Medical & Personal Expenses like Beverages, Tips and Gratitude’s, Telecommunication Charges, Wi-fi Charges, Laundry, Insurance of Any Kind, Visa Fees, Gst @5% and What So Ever Not Mentioned Under “cost Includes”1-1031-3

\\\\\\\\\\\\\\\"There is no happiness for him who does not travel. Therefore, wander. The fortune of him who is sitting sits. It rises when he rises, it sleeps when he sleeps, it moves when he moves. Therefore, wander!\" C’MORE caters to the needs of luxury and budget travelers alike. The organizational structure of the company assures personalized services suited to the needs of people of different countries and regions of the world. Personal care, Professionalism, Timing and Best Return Value is our Alma Mater.We work only as Incoming Tours Organizers, because we are Indians and we know our country well. Our long lasting 27 years’ experience in the travel and tourism destinations guarantees the best planning for your business and / or pleasure trips. We have secured our service excellence by setting and keeping high quality standards. We combine preferred and tourist popular hotels and destinations, in order to provide you with specialized tour packages, that correspond best value for your money and create the perfect environment for a relaxing and memorable stay. Great memories from our country is the best form of advertising for us and a good reason for you and your friends, family members or colleagues to come back again and again. Read More...