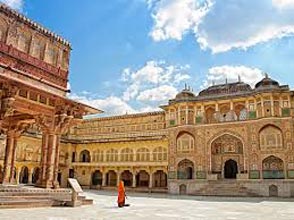 In order to take a break from the daily monotonous routine, one can travel to diverse locations. Travelling enables you to gain a wide and unique perspective regarding the existence of several cultures and styles of living. So, gather your family members or best friends and plan a vacation anytime soon. For getting the best deals on travel, directly contact us. Geeta Tour & Travels is one of the renowned travel agencies that are engaged in offering excellent tour and travel services to the tourists across Jaipur (Rajasthan, India). Mr. Vijay Singh (Owner) laid the foundation stone of the company in the year 2011 with a motive to organize beautiful and dream-like vacations for our esteemed clients. Under the guidance of our diligent mentors, we have been able to cater to the diversified requirements of the tourists. Our services are rendered to Indian as well as foreign tourists. Read More...