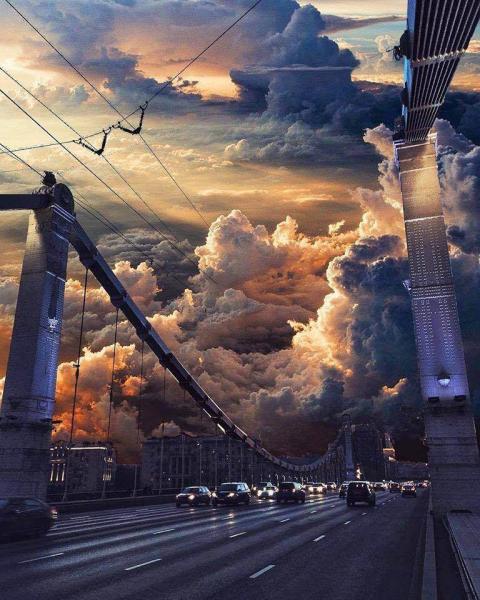 МОSCOW is unique, since in its architecture you may find characteristic features of the West as well as the East. Let us invite you to the tour through the centre of Moscow. We will start our excursion from the observation platform on the Vorobyovy Hills, which offers a good panoramic view on the city and on the Moscow river. During the tour you will admire the most animated street in Moscow – Tverskaya, and also the Red Square with Lenin's Mausoleum, the Cathedral of Vasily the Blessed, GUM (famous Russian department store) and the Alexander Garden nearby. You will also see the Bolshoi Theatre, the White House, the former KGB (State Security Committee) building, the Cathedral of Christ the Saviour, ruined by Bolsheviks and later rebuilt, the Novodevichy Convent and the Victory Park on Poklonnaya mountain with beautiful fountains and churches.

THE ARMOURY CHAMBER is the world-famous museum, where you can find masterpieces of Russian weapons and armour, ceremonial robes and coronation dresses of princes and priests, as well as rich collection of carriages and harnesses made in gold and silver.

THE DIAMOND FUND is the richest museum of Russia, having in his funds a unique collection of best jewels made by famous Russian and foreign goldsmiths, as well as enormous diamonds from Russian mines. Created by Peter I as storehouse for state regalia, it has been enlarged during the Romanov time. Nobody can remain indifferent, having seen nuggets of gold and platinum, such as 36 kg "The Large Triangle" and, of course, a crown of great beauty with 5000 diamonds and 75 pearls made for Russian empress Catherine the Great.

CATHEDRAL OF VASILY THE BLESSED is one of the most famous monuments of old Russian architecture. Even in the XVI century it was admired by travelers, and later it became an icon of Russian history and national character.

WALKING TOUR THROUGH THE CENTRE OF MOSCOW will begin at the Okhotny Ryad metro station which is situated next to the State Duma building. We will pass by the Bolshoi Theatre, the State Historical Museum, the statue of marshal Zhukov. We will visit the Red Square, see Lenin's Mausoleum, the Cathedral of Vasily the Blessed and GUM (famous Russian department store) building. We will admire the Alexander Garden and worship the Tomb of the Unknown Soldier. Then we could take a walk in the narrow passages of old Moscow.

CATHEDRAL OF CHRIST THE SAVIOUR is the highest and one of the biggest Orthodox churches in the world. Nowadays it is the main cathedral of the Orthodox Church - Kirill, the Patriarch of Moscow and all Rus' himself is its dean. It was built by decree of emperor Alexander I to honour the victory over Napoleon, to memory the dead soldiers and to thank Christ for saving Russia from defeat. In 1930s they decided to replace the cathedral with a Palace of the Soviets, so the cathedral was demolished. In fact, the Palace of the Soviets was never built, but they created an open-air swimming pool named “Moscow”. The Cathedral of Christ the Saviour was rebuilt on the same place in 1999 and consecrated, in 2000.

ARBAT STREET is one of the oldest and the most popular pedestrian area in Moscow. Being called the Russian Montmartre, it is full of different cafes, antique shops and little shops with traditional Russian gifts and souvenirs. Numerous artisans and painters display their works right there.

MOSCOW METRO is rightfully considered as the most beautiful one in the world. The stations built in the Stalin era are remarkable for their bold ornamentation and unique architecture. They were supposed to look like temples and palaces. Most of these stations are decorated with sculptures, stained-glass windows, different sorts of marble, and bronze chandeliers.

NOVODEVICHY CONVENT is one of the most splendid architectural ensembles of Moscow. The convent is situated in the south-west of the city, 4 kilometers from the Kremlin, in the bend of the Moscow river. It consists of 14 buildings including out- and housing edifices, bell towers and churches. The convent is found in 1524 by decree of prince Vasily III in honour of the capture of the city of Smolensk during the war with the Lithuanians.

THE STATE TRETYAKOV GALLERY is the world biggest museum of Russian art. The collection, gathered by Tretyakov as a private one, was later presented to Moscow city in 1892. Those days it contained 1287 paintings, 518 sketches and 9 statues. Now it presents a huge amount of art objects from the 11th to the early 20th century.

THE PUSHKIN MUSEUM OF FINE ARTS contains a fine collection of foreign arts from the oldest times up to our days. With objects of ancient Egyptian, Greek and Roman art as well as masterpieces of the Middle Ages and the Renaissance epoch, beautiful halls of the museum will hold you captured in the atmosphere of the centuries past.

STALIN SKYSCRAPERS After the Second World War, when the Soviet Union was supposed to dominate over the rest of the world, Stalin decided that in Moscow there was some lack of skyscrapers that could become an icon of the city of the Soviet epoch. As a result, in Stalin’s last ten years in power, they built seven skyscrapers – later named “the Stalin high rises” - that demonstrated an elaborate combination of Baroque and Gothic styles. They were built in 1947 to honour 800th anniversary of Moscow. During the tour you will observe with your own eyes the main MGU (Moscow State University) building, MID (Ministry of Foreign Affairs) building, hotels “Leningrad” and “Ukraina”, as well as professor Tikhomirov’s house from the movie “Moscow Does Not Believe in Tears”. You will see where the most famous art workers of the USSR (as AndreyVoznesensky, Evgeny Evtushenko, FainaRanevskaya, Galina Ulanova and many others) lived. Besides, you will find out how the skyscrapers were built; how their names and functions changed; what happened to the eighth and ninth towers…

VDNH (Exhibition of Achievements of the National Economy) is a group of pavilions in the north-east of Moscow – one of 50 biggest in the world. It was officially opened in 1939. Many of its historical buildings are world-known. Created in the Soviet epoch, they represent the ideals and symbols of that era: Worker and Kolkhoz Woman monument, Friendship of Nations of the USSR, The Stone Flower and The Golden Spike fountains, pavilions dedicated to the Ukrainian Soviet Socialist Republic, to the Uzbek Soviet Socialist Republic, to the Mechanization and Electrification (aka Cosmos). During the tour you will walk through the whole territory of the exhibition. This is your chance to plunge into fascinating history of this place!

THE MEMORIAL MUSEUM OF COSMONAUTICS was firstly opened on April 10, 1981 to commemorate the 20th anniversary of the day Yuri Gagarin became the first human to orbit the Earth in space. After three years of reconstruction (2006-2009) the museum was reopened. Nowadays it is highly modern and very beautiful place. The museum primarily focuses on the Soviet space program – within its halls you will find full-size model of one part of the Mir station (you can even get into it), base compartment of Soyuz spacecraft, pilot ejection seats of Buran space shuttle and recovery capsule of Soyuz in which in 1989 the astronauts returned to the Earth. There are training apparatus for the astronauts. You will also see some interactive exhibits as, per example, mission control center in miniature, from which you will be able to observe international space station in real time. With an extra ticket you may take a virtual space flight in Buran-2, go into open space or take a virtual walk on the international space station.