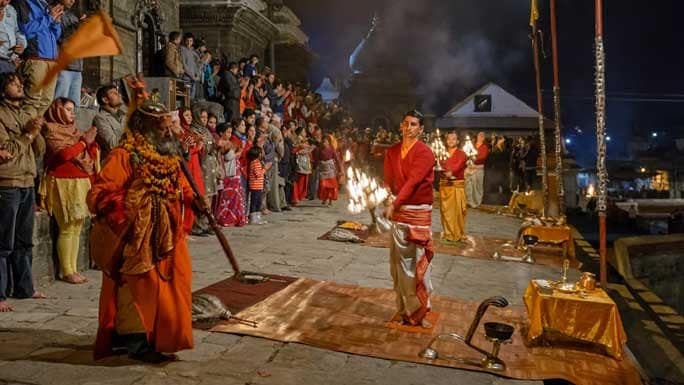 Pashunath darsan followed by Kathmandu City Tour of a full day from morning 9 a.m. to 4 p.m. accompanied by expert city / cultural guide with enough information to offer with a cheerful drive to take you around the city tour, in our spacious coach or cars as per the size of the group. Kathmandu City Tour leads you to its famous and important historical and religious places of great interest covering all World Heritage Sites with Syambhunath-Bouddhanath-Pashupatinath with Patan / Lalitpur city. Kathmandu City Tour begins from your hotel, where our guide will pick you at a given time by 9 a.m. where drive leads you on the outskirt of city area to reach famous and ancient Buddhist monument of Syambhunath Stupa. A. Pashupatinath Temple - Pure Hindu temple A short drive takes you to the famous Hindu temple of Pashupatinath, a holy spot and centre of Hindu pilgrimage from all over Nepal as well as India. A sacred Hindu Temple of pagoda design with gilt roof and richly carved silver doors, the temple dedicated to Lord Shiva close to holy Baghmati River. One of the most sacred sites of entire Hindu world, Pashupatinath Temple is the nerve center of pilgrimage for millions of Hindu on the auspicious day of Shiva-Ratri (birth anniversary of Lord Shiva) around mid February as per Hindu calendar. Inside the main temple premises where only Hindus are permitted to enter, non Hindu and foreign visitors can observe the temple from the east side of the Baghmati River. B: Syambhunath Stupa: Tour of one hour with short drive: One of the main landmarks of the country located on a green hilltop west from Kathmandu city, also known as Monkey Temple due to many monkeys (of Rhesus species) that dwells and plays around the Stupa premises. Old Swayambhunath a Buddhist Stupa of more than 2,600 years old history, and popular pilgrimage sites for both Buddhist and Hindu religions. An ancient Stupa or Chaitya of Asia and a major symbol of Nepal’s Buddhist heritage, Swayambhunath represents Primordial Buddha or Adi-Buddha. The hilltop where Swayambhunath Stupa built is called Padmagiri, Vajrakuta, Goering, Gopuchha, Samhegu, and Simbhu, listed in UNESCO World Heritage Site. Swayambhunath area offers grand views of whole Kathmandu valley with distant snow-capped peaks. C. Bouddhanath Stupa: Tour of an hour with a short drive and possible lunch stop. After Syambhunath Stupa visit of great interest where drive leads towards the eastern side of Kathmandu city to reach at impressive large dome Stupa of Bouddhanath, the place also called as ‘Little Tibet’. Little Tibet known due to large numbers of people around this area are of Tibetan origin with similar traditions and culture of Tibet interwoven to Tibetan Buddhism known as Mayana sect. Bouddhanath stands as the largest Buddhist shrine of South Asia, the ancient colossal Chorten / Stupa built around 6th century A.D. by King Man Deb. A monument with a series of three terraces looking from bird's eye view it’s a relevant shape of a lotus flower which indeed remains a very holy object for all world-wide Buddhists devout. The Stupa known as Chorten / Stupa surrounded by a circular market with four pairs of Buddha's eyes giving a stunning flash around four cardinal directions, as a diligent watch over the people and their commitments. The Stupa embraces authentic philosophy of Mahayana faith of Buddhism which is known as Lamaism in Nepal, Sikkim, Ladakh, Bhutan and Tibet. With time here for lunch break enjoy meals in a nice terraced restaurant with views of large Bouddhanath Stupa. D. Patan / Lalitpur City of maximum one hour tour: With interesting moment around Pashupatinath temple, drive leads towards the south of the city to enter Patan also called Lalitpur which means the city of great art and masterpiece handicrafts. Patan / Lalitpur city in early days was a separate kingdom around 6th to 17th Century, tour begins from Patan old Durbar Square teemed with full of local traditional activities. Entering inner premises witness ancient buildings of masterpiece architecture with intricate carving of fine arts, where most of the old monuments listed in UNESCO World Heritage Sites. Places around Patan-Lalitpur of great interest to visit for an hour around ancient culture and heritage sites. Patan Durbar Square, Mul Chowk (royal court yard and verandah), Sundari Chowk), Keshav Narayan Chowk, Krishna Temple, Mahaboudha, Kumbheshwor, Jagat Narayan Temple, Rudra Varna Mahavihar, The Asoka Stupas, Patan Industrial Estate with time permitting visit Tibetan Refugee Camp.

Payment Terms & Methods :
* You can pay upon arrival
* Airfare/Transport fare to be paid full at one time in advance.