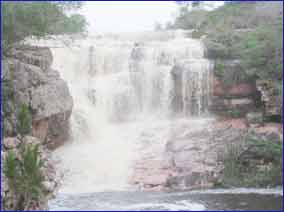 #1
Amont Things to Do in Bahia

With its 152,000 hectares of caverns, canyons, cascades, and deep valleys of diverse flora and fauna, the Chapada Diamantina National Park is one of the most attractive ecological refuges of Brazil. Ideal for the practice of eco-tourism, it is to be found in the central part of the State of Baha, in the north-eastern part of the country. It was established in September of 1985 and comprises the councils of Lencis, Andara, Palmeiras, Ibicoara and Mucuge. It holds diverse ecosystems with small patches of Atlantic Forest, the Cerrado woodland savanna type and the so called Caatinga dry or white forest areas with evidences of prehistoric life; as well as the Sierra of Sincor, which reaches heights of over 1200 m in some areas. History: Explorers and adventurers coming from all over Brazil invaded Chapada de la Diamantina in the early XVII century looking for gold and diamonds: thus started the populating of the area. The caves in the area reveal, through rock paintings, signs from the diverse people that have inhabited the zone since prehistory. Natural wealth: Endemic flowers such as orchids, humming bird, bromeliads, frogs and fish yet waiting to be catalogued by biologists, live in this natural refuge whose topography is responsible for the creation of the sources of the main rivers in Bahia: the Paraguacu and the Cuentas, and others reaching towards the San Francisco basin. The indiscriminate hunting of the past, which correctly encouraged its official creation as a National Park, decimated a great part of its animals. Diferent major species such as the Brazilian Tapir (Tapirus terrestris), the Giant Anteater (Myrmecophaga tridctila) and the Giant Armadillo (Priodontes maximus), all inique mammals of the place disappeared for that reason. But there are reduced populations of surviving yellow-belly lizards, pumas and jaguars, capybaras, Black-chested moustached tamarin Monkey (Saguinus mystax), Pampas Deer (Ozotoceros bezoarticus), boas and lots of birds. The local climate is characterized as tropical semiarid in general terms, with rainy southern hemisphere's summers that occasion sudden increases in the volume of the rivers. Attractions: You need at least a week to know the major amenities of the natural park. Citing only a few:. Caves of Lapa and Torrinha. The rock lounges at the former cave can reach heights of up to 32 m and show prehistoric painted inscriptions. Close to this enclosure is the cave of Torrinha, rich in rock primitive adornments. Mount of Father Incio. You can have a beautiful scenic view of Chapada Diamantina and watch magnificent sunsets from its top. It is sited in the Sierra of Sincor, 28 km away from Lencis. Cascade of Calmness. Its dark waters descend from a 15 m high granite formation whose access is through a 7 km path. Marimbus. Also known as pantanal (inundated area of the region). It is placed at the San Antonio River, 18 km away from Lencis. It is kept as a Protected Environment Place. Pit of the Devil. It is at the shores of the Mucugezinho River, close to a 40 m high waterfall. It is a pit of dark waters, ideal to take swim. It is 21 km away from Lencis. Cascade of the Smoke. It is one of the highest waterfalls in Brazil with 340 m of height. Its waters fall through a totally vertical wall forming a kind of permanent vapour cloud. Cascade of Ramalho. A 110 m high waterfall of the Paraba River; not bad for bathing. Enchanted Pit and Blue Pit. One of the most visited places by eco-guests; the Enchanted Pit's name is owed to the phenomenon of colorations of its crystalline waters, due to the sunrays coming into the cave through a natural crack at a given time of the day. It is located at 130 km from Lencis. The Blue Pit is 40 km away and shows an equal phenomenon. Visitors may take a swim. Advises: Be happy and in a good physical shape. Hire an expert guide who knows the region well to take a hike. Learn the basic first aid and orientation techniques and never, never go alone. Keep a solar protector, caps or hats to avoid sunburns. Take enough water to realize the trekking, for the weather in the region is warm. You should avoid smoking in order to prevent fires. It is essential to pick up and bring all your garbage back with you. How to get there: Take the BR-241 route, if coming from Salvador or Brasilia, up to Sabanas, in the border of the park. It is the city with the best infrastructure in the area and it has an airport attending regional flights.

Top Places to Visit in Bahia

All Places to Visit in Bahia