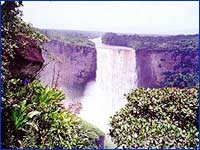 #2
Amont Things to Do in Potaro-Siparuni

Kaieteur Falls is a waterfall on the Potaro River in central Guyana. It is located in the Kaieteur National Park, a region that is also claimed by Venezuela. It is 226 meters (741 feet) when measured from its plunge over a sandstone cliff to the first break. It then flows over a series of steep cascades that, when included in the measurements, bring the total height to 251 meters (822 feet). Kaieteur Falls is about five times higher than the more well known Niagara Falls, located on the border between Canada and the United States and about two times the height of the Victoria Falls located on the border of Zambia and Zimbabwe in Africa. It is a single drop waterfall which is the 122nd tallest (single and multi-drop waterfall) in the world according to the World Waterfalls Database. The same web site lists it as 19th largest waterfall in terms of volume, and in their estimation, Kaieteur is the 26th most scenic waterfall in the world. Its distinction lies in the unique combination of great height and large volume, averaging 663 cubic meters per second (23,400 cubic feet per second). Thus it is one of the most powerful waterfalls in the world, rivaling even the Jog Falls of India's Karnataka state during the monsoon season.

Top Places to Visit in Potaro-Siparuni

All Places to Visit in Potaro-Siparuni