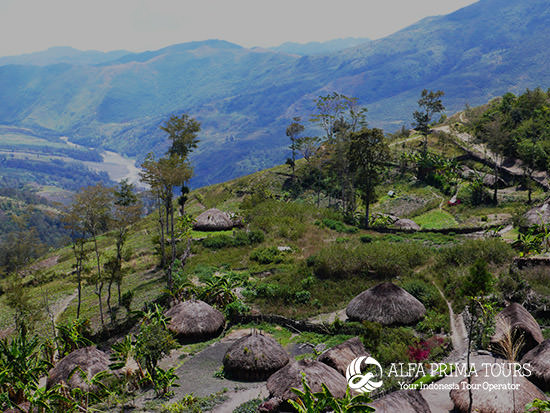 Papua province is the largest and easternmost province of Indonesia.The total area is about 319,000 square km with a population of about 3,5 million people. The motto of Papua is Karya Swadaya(Sanskrit)means; work with one’s own might. 83% of the Papuans identified themselves as Christian(65% Protestant and 18% Roman Catholic), 16% of the Papua populations is Muslim and 1% Buddhist or Hindu. The city of Jayapura is the capital, also the largest city of Papua built on a slope overlooking the bay. Central east-west mountain range dominates the geography of the island over 1,600 km in total length.The province contains the highest mountains between the Himalayas and the Andes rising up to 4,884 metres high and ensuring a steady supply of rain from the tropical atmosphere.  The southern and northern lowlands stretch for hundreds of kilometres and include lowland rainforests, extensive wetlands, savanna grasslands and expanses of mangrove forest. The Lorentz National Park in the southern lowlands is a UNESCO world heritage site. Papua has an estimated 16,300 species of plant, 124 genera of which are endemic.Papua’s knwon forest fauna includes; marsupials, other mammals, bird species such as parrots and cockatoos and the world largest butterflies. The waterways and wetlands of Papua are also home to salt and freshwater crocodile, flying foxes, osprey, bats and other animals.