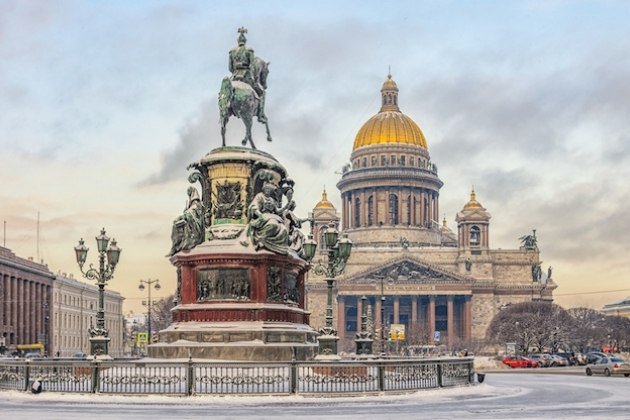 A Day in St.Petersburg Package

SAINT PETERSBURG — Was built on numerous islands, and is considered to be one of the most beautiful in the world. On this tour you will see all the major city highlights in the course of a 3-hour tour, including a visit to the Peter & Paul Fortress, the first building of the city and once a prison for revolutionaries and now the burial place of Russian Emperors.

HERMITAGE MUSEUM — The Hermitage ranks among the world’s major museums. Its collection consists of nearly 3 million art objects (West European art, the Antique world, Primitive culture, Oriental culture and art, the history of Russian Culture and numismatics). Exhibits are displayed in the Winter Palace, as well as the Small, Old and New Hermitages.

PETERHOFF — Is a jewel of the Russian art, a town of parks, palaces and fountains. The Upper and the Lower Parks are the masterpieces of art of gardening numbering over 170 fountains, 5 monumental cascades. The Grand Cascade, which goes downhill from the palace towards the Baltic Sea, is one of the largest fountain ensembles in the world.

THE RUSSIAN MUSEUM — Is the first state museum of the Russian fine art in the country. It was established in 1895 in St Petersburg under the decree of the Emperor Nicholas II. Grand opened for visitors on March 19 (March 7, the Old Style) 1898. The Russian Museum holds many exhibitions both in Russia and abroad. The Museum holds more than 50 temporary exhibitions and organizes more than 10 in other cities and abroad annually. Catalogues, albums and booklets made by museum researchers accompany many exhibitions.

KUNSTKAMERA (The Chamber of Curiosities) — The first museum in Russia, one of the oldest and largest Anthropology and Ethnography museums in the world. It is also called Peter the Great's museum as it is based on the Tsar's personal collection. The museum has exhibitions of items showing the life and culture of people of various ages and from different countries. At that period of time Peter’s collection included bizarre, live exhibits of deformed or unusual people including a hermaphrodite. The first Russia’s museum also comprised a library, an anatomical theater and observatory.

MUSEUM OF ZOOLOGY — The Museum was created in 1832 on the basis of the collection of Kuntskamera. It holds the exhibits of over 17 million species, although only 500 thousand species can be displayed in the museum's current 19th century home. Exhibits range from enormous dinosaur, mammoths and whale skeletons to stuffed animals and birds and a unique collection of butterflies. St. Petersburg Zoological Museum is considered to be one of the world's biggest museums of that kind.

RIVERS AND CANALS BOAT TOUR — Saint-Petersburg created by Peter the Great to rival Venice, its 101 islands, 66 canals, and hundreds of bridges have secured its reputation as the most beautiful city in the country. A boat trip is an essential part of your St. Petersburg holiday in order to see how the city grew along and around the Neva and how many of its landmarks turn their faces toward the water. We guarantee it will be a trip you will remember for a very long time!