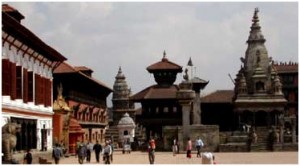 Bhaktapur, or Bhadgaon is situated at an altitude of 1,401 meters and is covers an area of four square miles. . The city lies fifteen kilometers to the east of Kathmandu, and is linked by a highway. According to a legend, this city was founded in 889 AD by the late King Anand Deb who belonged to the famed Lichhabi dynasty. This city is also known, is a museum of medieval art and architecture with many fine examples of sculpture, woodcarving and colossal pagoda consecrated to different gods and goddesses. The famous Bhadgaolen topi or cap is made here. It is also renowned of its myriad wonders of cultural and artistic achievements. Pottery and weaving are its major traditional industries. The most famous picture of this area is Bhaktapur Durbar Square. The place of 55 windows, the stone temple of Batsala Devi full of convoluted carvings, innumerable temples, architectural showpieces like the Lion Gate, the statue of king Bhupatindra Malla, the picture Gallery, the Batsala temple, etc are the major focal points of Bhaktapur Durbar square and it was listed in the UNESCO World Heritage Monuments List in 1979. The other famous places of this area are:

Siddha Pokhari: This is a big rectangular water tank located near the main city gate. It was built during the reign of King Yakshya Malla in the early fifteenth century and is associated with a number of different myths. From this spot a wide range of snowy peaks are visible on clear days.

The city of Bhaktapur lies 14 km to the east of Kathmandu. Its Durbar Square is a symphony of art and architecture. The centerpiece is the 55-window palace overlooking the square, which is paved over with brick. The history of the palace dates back to the 12th century.

Bhaktapur Durbar Square is a conglomeration of pagoda and shikhara-style temples grouped around a fifty-five window palace of brick and wood. The square is one of the most charming architectural showpieces of the Valley as it highlights the ancient arts of Nepal. The golden effigies of the kings perched on the top of stone monoliths, the guardian deities looking out from their sanctuaries, the wood carvings in every place - struts, lintels, uprights, tympanums, gateways and windows all seem to form a well-orchestrated symphony. The main items of interest in the Durbar Square are:

The Lion Gate: Dating as far back as 1696 A.D., this gate is guarded on either side by two huge statues of lions. Alongside there are two stone images of Bhairab (the dreadful aspect of Shiva) and ugrachandi (the consort of Shiva in her fearful manifestation).

The Golden Gate in Bhaktapur: The Golden Gate is said to be the most beautiful and richly moulded specimen of its kind in the entire world. The door is surmounted by a figure of the goddess Kali and Garuda (mythical man-bird) and attended by two heavenly nymphs. It is also embellished with monsters and other mythical creatures of marvellous intricacy. In the words of Percy Brown, an eminent English art critic and historian, the Golden Gate is 'the most lovely piece of art in the whole Kingdom; it is placed like a jewel, flashing innumerable facets in the handsome setting of its surroundings'. The gate was erected by King Ranjit Malla and is the entrance to the main courtyard of the palace of fifty-five windows.

The Palace of Fifty-five Windows: This magnificent Palace was built during the reign of King Yaksha Malla in 1427 A.D., and was subsequently remodelled by King Bhupatindra Malla in the seventeenth century. Among the brick walls, with their gracious setting andsculptural design, is a balcony of fifty-five windows, considered to be a unique masterpiece of woodcarving.

The Statue of King Bhupatindra Malla: This statue showing King Bhupatindra Maila in the act of worship, can be seen placed on a column facing the palace. Of the square's many statues, this is considered to be the most magnificent.

Batsala Temple: The stone temple of Batsala Devi depicts many intricate carvings; however, it is most famous for its bronze bell, known to local residents as 'the bell-of barking dogs', as when it is rung, all dogs in the vicinity begin barking and howling! The colossal bell was hung by King Ranjit Malla in 1737 A.D. and was used to sound the daily curfew. It is nowadays rung every morning when goddess Taleju is worshipped.

Nyatapola Temple: This five-storeyed pagoda was built by King Bhupatindra Malla in 1702 A.D. It stands on five terraces, on each of which squat a pair of figures: two famous wrestlers, two elephants, two lions, two griffins, and Baghini and Singhini - the tiger and the lion goddesses. Each pair of figures is considered ten times stronger than the ones immediately below, while the lowest pair, the two strong men Jaya Malla and Phatta Malla, were reputedly ten times stronger than any other men. This is one of the tallestpagoda-style temples in Kathmandu Valley and is famous for its massive structure and subtle workmanship.

Just beside temple is a monastery (Math) with exquisitely carved peacock windows. These famous windows were also carved during the reign of King Vishwa Malla. The monastery is full of artistic acades of latticed windows and engraved columns.

Bhairab Nath Temple: This is another pagoda temple of lord Bhairab, the dreadful aspect of Shiva. It stands a short distance away from the temple of Nyatapolaand was originally constructed by King Jagat Jyoti Malla on a modest scale. It was later remodelled by King Bhupatindra Malla, a zealous lover of the arts, into what it is now a three-storeyed temple.

Datta Traya Square: Further to the north-east of Toumadhi Square is another interesting locality called Datta-Traya Square. In fact, this is the second most important urban spot in Bhaktapur. The Datta-Traya Temple, also built by the late King Bhupetindra Malla in the 17th century, is an actually a pagoda. It has an amusing history. It is a wooden temple facing west and it is believed that the timber used for its construction was sawn out of a single tree. Thus, a fertile imagination is necessary to picture the actual size of the forest giant! The square has been named after the deity itself. The three-storied temple is dedicated to the three-headed deity of the orthodox Hindus. It symbolizes the divine triad, a spiritual combination of Brahma (the Creator), Bishnu (the Preserver) and Maheshwor (the Destroyer). The square as a whole can be regarded as a gallery of intricate wood carvings. In the mystical ambience of the square one can actually get whiffs of the aromas of bygone medieval eras. In the periphery of the temple, are monasteries, the Bhimsen Temple and a platform. There are a couple of handicraft quarters too where watching the skills of the carvers is a sheer joy. In the Pujari-Math Temple is the renowned Peacock Window facing east. A pure wooden structure, it is a masterpiece indeed. Apart from these, there exist two special museums - the Metal Craft Museum and the Wood Craft Museum.

Changu Narayan: The temple of Changu Narayan is situated on a ridge to the north of Bhaktapur. It was built in the 3rd century and is dedicated to Lord Vishnu. The temple is a very ancient specimen of a Pagoda-roofed shrine – one of the earliest in the valley. It is decorated with some of the finest stone, metal and woodcraft. Most of the architectural wealth was put together during the reign of the Malla kings who ruled the Kathmandu valley from the 13th to the 18th centuries. The temple, which is thought to have been built by Bishnu Gupta and later extended by Hari Dutta Verma in 323 AD, is virtually a living museum.

The views of the surrounds are splendid. It is 8 miles due east of Kathmandu. Himalayan peaks like Manaslu (8156m), Ganesh Himal (7111m), Langtang (7246m), Choba Bhamre (6016m), Gaurishankar (7134m) and Numbur (6957m) can be clearly seen from Nagarkot. A motorable road links Nagarkot with Bhaktapur.

Taumadhi Square: A narrow alley leads from the Durbar Square to Taumadhi Square that contains the pride of Bhaktapur and the symbol of the artistic and architectural supremacy of the Kathmandu Valley - the Nyatapol temple. Built atop a massive terraced plinth, the splendid five-roofed pagoda is the tallest in Nepal. Its stone, woodcarvings, and graceful design display sacred architecture at its height. The stairs leading up to the temple is flanked by stone figures of deities and mythical animals.

Thimi: It is a farming town and famous for earthen pots, home spun cotton cloth and artistic masks. You can wonder around its quite farm house and lush rice fields, and also visit a brick making factory.