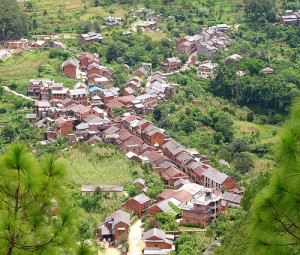 Bandipur is a hilltop settlement in Tanahu District, Gandaki Zone of Nepal. Because of its preserved, old time cultural atmosphere, Bandipur has increasingly been coming to the attention of tourism. it has a population of about 9952 people residing in 1929 individual households.Bandipur is located at 27.56 N, 84.25 E at an elevation of 1030 m. on a mountain saddle of the Mahabharat range. It is about 700m above the Marsyangdi River Valley. The town is 143 km. west of Kathmandu and 80 km. east of Pokhara. Since 1998, it has been connected by an 8km. access road out of the dusty village of Dumre along the Kathmandu-Pokhara highway. Before that there was only one unreliable road, usually not accessible during the monsoon season or accessible only by tractors. Originally a rustic magar village, Bandipur developed into a prosperous trading centre during the early 19th.Century. The neighborhoods consisted of town-like features: substantial buildings with neoclassical façades, shuttered windows, and streets paved with slabs of silver-hued slate. The township arrived atits prime during the autocratic rana regimes (1846-1951), when, in recognition of its power and prestige, the municipality was granted special permission to establish its very own library which exists to this day.

The mountain saddle, which is just 200 m. long, is barely wide enough to accommodate the main street that is lined by 2 –3 storey buildings on either side. At the rear of these houses the terrain descends steeply making the gardens accessible only by a series of steps.now a days bandipur has become the main attraction of tourist.the culture and tradition of the villages and the overwhelming nature of the villagers attract visitors.it is the place of temples and beautiful seaneary.

The temple of Khadga Devi is one of the most revered temples in Bandipur, which is belied by its look of a residential house except for the finial. This temple is opened to devotees only once a year on the day of Phulpati (seventh day of the Hindu festival Dasain). The shrine does not contain any statues of gods or goddesses, but a Khadga, a sacred sword wrapped in layers of cloth.. Legend has it that the relic was a present from Lord Shiva to Mukunda Sen, king of Palpa (1518-1553 A.D.) The Khadga is worshipped as a symbol of the female power, hence the name Khadga Devi, which means goddess of the sword. Another mythological story is that if anyone looks at it, he or she invites instant death by vomiting blood.

This temple is located in the main bazaar area and is constructed in the pagoda style. An image of the goddess Bindhabasini is enshrined here. It also contains statues of other goddesses. During the New Year,the celebrations the Bikram Sambat, the image of Bindhabasini is put on a chariot and pulled through town amidst other revelry.

This temple lies to the west of Bandipur Bazaar. According to folklore, people would place 12 eggs inside the temple and cover it with straw and a brick before the start of the planting season. If the egg remains fresh after one year when they were uncovered, it is believed that there would be a good crop the following year.

This temple is located to the southeast of the main bazaar. Its architecture shows it to date from the medieval period. The temple is in the style of a pagoda. The struts and tympanum are adorned with figures of Bhimsen and various mythical creatures. The original statue of the goddess Mahalaxmi, however, was stolen, and it has been replaced by a new one.

This temple lies to the east of the main bazaar area. Statues of the god Harihar and the ten incarnations of Lord Vishnu are installed inside.

Tundikhel is an excellent vantage point situated to the north of Bandipur's main bazaar. From here, one can view the magnificent Himalayan Range including the spectacular peaks of Dhaulagiri, Machhapuchhre, Langtang, Manaslu and Ganesh Himal, among others. The legendary Gorkha Palace and the famous Manakamana Peak can also be seen clearly. Other sites include the Marsyangdi Valley, Bimalnagar and Dumre.

A fifteen-minute walk to the north of Bandipur Bazaar brings one to the shrine of Parpani Mahadev. From above, it appears as a small bush. A stone pathway leads to the cave-like shrine. Inside, there is a waterspout, and below are several small statues of various gods. They are known as Parpani Mahadev. In the old days, people gathered here to sing hymns and bathe under the fountain before going to work in their fields. A pond has been built here to add to the beauty of the site.

Purano Kot (Gurungche Hill)
Purano Kot, originally a fort, lies at a distance of about 500 m to the west of the main bazaar. It takes about twenty minutes of easy walking over the stones to reach the top. There is a small temple nearby containing a number of old statues. Next to the temple stands a newly built temple of Thanithan Mai. The local people believe that praying to Mahadev at this spot during a drought will bring rain.

Tandrang Tundrung is a fifteen-minute walk to the west of Bandipur Bazaar. Its unusual name is said to imitate the sound that is produced when a stone is thrown into the well here. According to the old-timers of the village, it was used by Mukunda Sen to pass between Mukendeswari and Tandrang Tundrung to perform religious deeds.

This ancient fort lies to the northeast of Bandipur and is believed to have existed from the time of Mukunda Sen. Since the spot lies at a higher elevation than the bazaar; you can get a stunning view of the mountains from here.

This place lies to the east of the main bazaar and can be reached in ten to twenty minutes. The name of this place means three water spouts. Two fountains were added later. A shrine dedicated to Lord Shiva lies nearby.

This is a forest of Sal trees located to the east of the main bazaar. Nature enthusiasts will enjoy visiting the spot for its greenery and tranquility.

This historic library lies in the heart of Bandipur Bazaar. It was transformed into its present magnificence from a shelter for sages in 1945. It has been serving book lovers from the days of the Rana regime.

Ramkot is a two-hour walk to the west of Bandipur. It is an easy hike passing through Muchuk Village from where you can also visit Mukundeswari. Ramkot is a typical Magar village with traditional round houses.

Ramkot is untouched by modern development and offers an opportunity to experience the lifestyle of rural Nepal. From here, one can go on to Chabdi Barahi, which can be reached after two hours of easy hiking.

Mukundeswari lies at an altitude of 1,830 m. It is about a two-hour walk to the west of Bandipur. The place looks like a gallery of ancient weapons and other antiquities as swords of different shapes and sizes lie scattered all around.

Chabdi Barahi is a four-hour walk to the west of Bandipur. This pilgrimage spot can also be reached by road from Damauli. Devotees sacrifice pigeons and various other animals to the shrine here.

SIDDHA CAVE
Bandipur amazes visitors with its geology as much as with its scenic and cultural attractions, and it would be unthinkable not to visit its caves. The must-see destination here is Sidhha Cave, discovered only in 1987. It is said to be the largest cave not only in the kingdom but also on the South Asian subcontinent. Sightseers can check for themselves by exploring its inner recesses which are filled with natural artworks created by the stalactites and stalagmites here. Siddha Cave is situated just above the cliff of Bimalnagar, from where it is a thirty-minute climb. The cave can be reached from Bandipur after ninety minutes of easy walking. Patalidwar This cave also goes by the name of Gateway to Heaven. It is believed that anyone entering the cave will cause all the sins of their ancestors to be washed away and bring them salvation. The way to this cave is through a jungle and takes about two hours from Siddha Cave. A religious fair is held here in April when participants perform the Chutka dance.