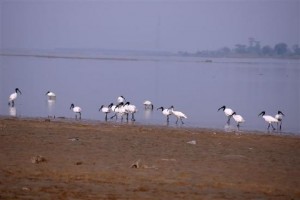 Koshi Tappu Wildlife Reserve which is named after the biggest river of Nepal, “the Koshi” was established in 1976, and covers an area of 175 sq. km to the north with one kilometer long barrage that spans the Koshi River. Location of Koshi Tappu Wildlife Reserve is situated on the flood plains of the Sapta-Koshi River in Eastern Nepal.The vast expanse of water created by the barrage, marshes, lagoons, mudflats and arable land that lie around it offers an outstanding wetland which has created one of the best and finest bird watching sanctuaries in Asia. It is a major residing, staging and wintering site for water fowls and waders in the sub-continent. Due to its international importance for the conservation of waders and Ramsar, this site has gained even more prominence since the wetlands convention in 1987.

The body of water supports more than 100 species of fish including the human size catfish known as Gonch, famous sporting fish the Mahasheer and delicious species the Jalkapoor. The large reptiles inhabiting this reserve include the longest snake species of the sub continent, the rare Indian rock python, Crocodile and a Number of lizards and turtle species.
It is home to more than 280 bird species including 20 duck species, 2 species of ibises, many storks, egrets and herons. The endangered swamp partridge and Bengal florican are found here. The Koshi Barge is an extremely important resting-place for migratory birds.During October to April it is possible to spot more than 100 species in a single day of birding. Massive flocks of ducks numbering more than 50,000, chiefly of northern Pintails, Mallard and Northern Shoveler are a common sight during fall and winter. Globally threatened species occurring in this area include Black-necked Stork, Greater Adjutant Stork, lesser Adjutant Stork, Baer's Pochard, Red-necked Falcon, Bengal Florican, Great stone Plover, Black-bellied Tern, Dusky eagle Owl, Swamp Francolin, Marsh Warbler, etc.The last surviving population of wild buffalo or arna is found here. The reserve is also home to many types of mammals such as hog deer, spotted deer, wild boar and blue bull. The endangered Gharial crocodile and Gangetic dolphin have been recorded in the Koshi River.
One of the most rewarding and greatest assets of Koshi Tappu Wildlife Park is that it offers ample scope for nature walks. For those with curiosity and perseverance walking on foot is the most profitable way of exploring the grassland, river lagoons and woodlands.

Thus, visit to koshi tappu wildlife reserve provides you close up opportunities to view animals as well as experiencing the wild.Any type of personal expenditure such as phone, laundry, Mineral water, cold drinks and alcoholic beverages during the whole trip.
Food & accommodation cost in case of any natural calamity caused by weather
Rescue & insurance such as travel, cancellation, accident, health, emergency evacuation and loss, theft of or damage to baggage and personal effects. You are advised to insure for it.
Things of personal use.
Tips, Gratuities and expenditure