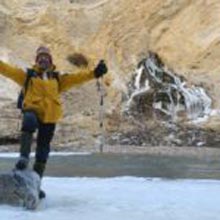 The Chadar Trek is a phenomenal winter expedition. Period.
If Ladakh is a remote Himalayan region of Indian Himalaya, then Zanskar would be called he remote region of Ladakh! The region gets its name from the Zanskar river that cascades through the stunning Zanskar Gorge famously referred to as ‘The Grand Canyon of Asia’. Zanskar river is a tributary of Indus and is popular for whitewater rafting and kayaking in the Summers. In the winters, the temperature in this cold, arid desert plummets drastically falling as low as -30 degree celsius forcing the Zanskar to freeze on the surface. Thus the top layer forms a veil of ice referred to as ‘Chadar’ by locals. Since all the roads leading out of Zanskar are closed due to heavy snow on the high passes, walking on ice is the only way for Zanskaris to venture out or outsiders to venture in. The Zanskaris have been walking this road of ice in winters for generations to reach Leh.
In the past decade, the Chadar trek has gained popularity among ardent hikers who visit this region to walk on the frozen river and see for themselves this incredible marvel of nature. Extreme temperatures, stark landscape, magnificent gorge, frozen waterfalls, and a mirror-like road of ice. The Chadar will test you and fill you with wonder and awe. This is an experience incomparable. Something which has a short life because of a road being constructed connecting Zanskar and Leh.Personal equipment and sleeping bags
Airfares to and out of Leh
Any additional transport or activities apart from the trip itinerary
Travel Insurance
Expenses rising through unforeseen conditions like bad weather, natural calamities, flight cancellations, etc
Rescue and evacuation services
Expenses of any personal nature like phone calls, drinks, cigarettes, souvenirs, laundry, etc
Tips