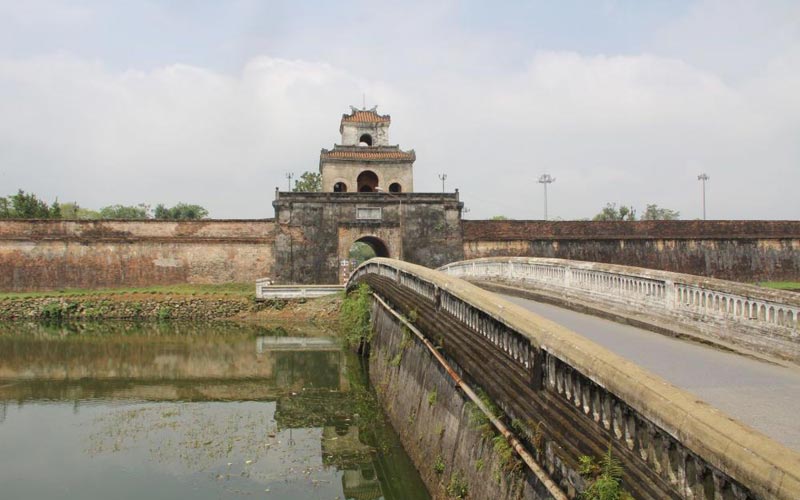 Spend full day to visit Hue City, Vietnam's political capital from 1802 to 1945 under the 13 emperors of the Nguyen Dynasty. Traditionally, the city has been one of Vietnam's cultural, religious and educational centers. Currently, the ancient capital of Hue was ranked 23 as the national monuments and particularly important. A full day tour brings you back to the past with many stories about Nguyen Kings; Khai Dinh, Tu Duc King and legend about Lord Nguyen Hoang, the founder of Thien Mu. This Pagoda is not merely a spiritual place but a place sightseeing, been the kings put in some spectacular scenery of Hue. Stand inside the temple fence, looking upstream, the river looks spectacular but still romantic. All of which have become major tourist attractions for visitors from all over the world.

FULL ITINERARY
Morning, meet our guide at your hotel and take a full day tour of Hue City, the former Imperial Capital of Vietnam for the 1802-1945 period and the last refuge of Vietnamese feudalism. The city’s beauty is characterized by a natural scenic landscape and an extensive variety of historical relics. Begin with Hue Citadel, a well-known UNESCO-recognized World Heritage Site which is a 520 ha fortress-like grand complex built in the early 1800s and featuring three enclosures separated by heavy ramparts namely Kinh Thanh Hue (Civic City) as the outer, Hoang Thanh (Royal City) as the middle and Tu Cam Thanh (Forbidden City) as the inner. Continue to Khai Dinh Tomb, the burial site of Vietnam’s second-to-last king, and the most elaborate compared to other kings’ tombs. The tomb shows a vivid European influence in architecture despite its Asian style.

Afternoon, you will take a boat cruise along the Perfume River to enjoy the open view of the river and its surroundings. Stop along the way and land on shore to visit two prominent historical landmarks namely the Minh Mang Tomb, where the 2nd Emperor of the Nguyen dynasty was buried, and Thien Mu Pagoda, an active Buddhist monastery overlooking the river from a vantage point with its origin dating back to 1601. Last destination is stop for shopping at Dong Ba market, which is the city’s traditional commercial center.

I always believe that success in business depends on how we impact on our clients and employees and whether we are able to enrich their life. A truly great organization must treat the people inside and outside with utmost care, respect and appreciation. Read More...