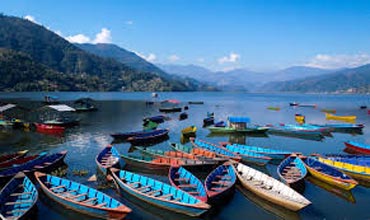 This 10-hour private excursion takes you to explore Pokhara, a resort city of remarkable beauty. Start with a sunrise tour of Sarangkot and experience the serenity of Phewa Lake and the magnificent summit of Machhapuchhre rising behind it that creates an ambiance of peace and magic. You will also visit the city’s most popular sights, such as Bindhyabasini Temple, Devi’s Falls, and the Tibetean Refugee Camp. Highlights Private tour is operated with just your party and a guide/driver Perfect introduction for first-time visitors Family friendly Enjoy fantastic aerial views Led by a local guideGratuities (optional)

Adam Tours and Travels Pvt. Ltd. is a pioneer travel agency,tour operator and trek organizer in Nepal since September 1996.It comprises of a group of well-experienced, highly qualified and professionally efficient persons who are familiar with requirements and interests of the guests from different countries of the world. With the commencement of our company in 1996, we have been offering our services of high quality to clients from different countries of the world. Read More...