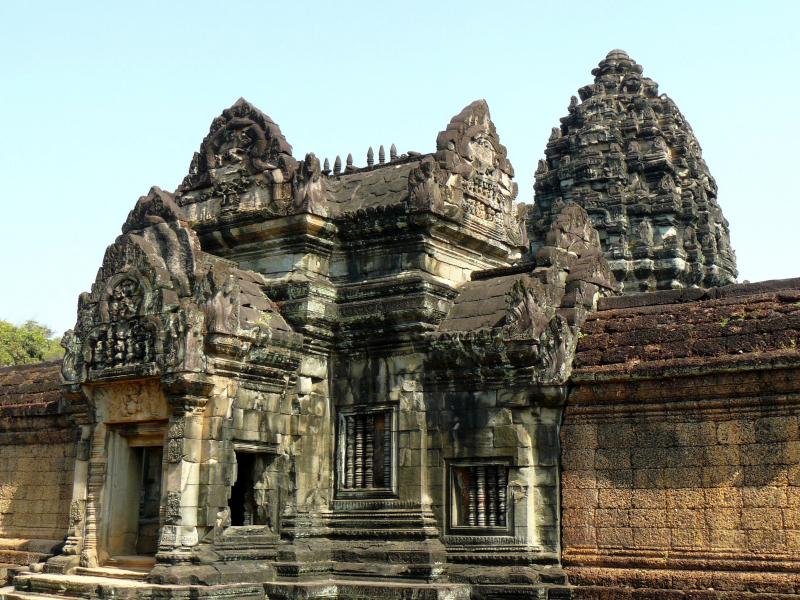 Glorious Civilization of Khmer The Khmer or Angkor Civilization came into existence during the period from 802 to 1431 A.D. and stretched as far as the modern Thailand-Burma Border in the West and Wat Phou of Laos in the North during its peak. Its emergence lies in the fact that the ancient Khmer rulers adopted a right political doctrine of its time, which enforce the unity among people. Moreover, they had developed an intelligent irrigation system to control the water of the great Mekong River for agricultures, which enhanced its prosperity. The Khmer Civilization had long been perished over 5 centuries ago, but it left outstanding monuments such as the great Khmer temples of Angkor Wat and Bayon and numerous unique sculptures like Apsara. The word "Angkor" is derived Sanskrit, an ancient Indian language, of "Nagara" which means "City". Angkor Wat literally means "City of Temple" and Angkor Thom "The Magnificent City". No doubts, the ancient Khmers were great masters of stone carving. As we can see today the unarguable evidences of various Angkor temples lying on the vast plain of Siemreap, or even beyond its present-day border to the Preah Vihear at Dangrek Mountain, Phnomrung and Phimai in Thailand and Wat Phu in Laos. All these were created and carefully crafts by the ancient Khmers in successive centuries. This seems to contradict with the normal and easy-going life of the local Khmer people and villagers of their time. What drive them to put such an extraordinary efforts and time will be explained in the next chapters. The study of Khmer civilization in depth is not easy and pain-taking by the historians and archaeologists. Most of the writing, found after the excavation of Angkor, were carved in the stones which became the unperishable materials against time. Although these evidences are important for us to understand the basic constituency of Khmer society and its chronology, they were mainly concerned with religious rituals, King's praise, and literature of Indian epics of "Ramayana" and "Mahabharata". There were little things saying about the ordinary life of the local people. Interestingly, we learn about the daily way of life of the ancient Khmers, not from the Khmer themselves, but from the Chinese annals. In the middle of 13th century during Chinese Yuan Dynasty, a Chinese ambassador named Zhou Daguan traveled to Angkor, stayed with the local villagers, and explored this empire for a year before his return. He wrote in his Chinese chronicle about this amazing empire, and explain vividly how the people lives with the clear portrayal of the Khmer society during those days. The center of the Khmer Civilization is at the Angkor Wat area which is situated on the plain of present-day Siemreap province north of the Great Lake of Tonle Sap. Throughout the course of Khmer history, the kingship was frequently attained by violent means with bloodshed throne. There were successive capitals built by different kings in the region, not far from each others; these capitals are at area of Angkor Wat and Roluos with the different names such as Harihalara, Yasodharapura, Jayendanagari, Angkor Thom and a few unknown names. Angkor Wat, Angkor Thom and several other Khmer temples are undoubtedly the relics of the past Khmer Civilization. In order to help travelers as well as readers to get a clearer picture of Cambodia and these temple complexes, we have put up several articles on Khmer Civilization which covers the historical background, successive eras from the beginning till the end, reasons of rise and fall of this civilization and a chronology.Cambodia visa fee currently / pax payable upon arrival Meals and drinks International air tickets & airport tax departure PNH: Personal expenses such as meals, camera fee to tour sites All other accounts are not mentioned in the above inclusion.