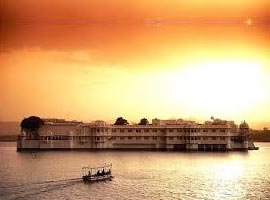 The golden triangle tour with Udaipur starts off exquisitely from Delhi and then to Agra, Jaipur and then covering the central attraction of the tour Udaipur and finally back to royal Delhi. The tour focuses mainly on Udaipur, the “Venice of the East”. Udaipur, a city of lakes is well famous for its charming and aesthetically gorgeous Mahal and Forts as well as commendable and unforgettable beauty of lakes. Some of the eye catchers include Sheesh Mahal, tremendously attractive Moti Mahal, Krishna Villas, Dilkush Mahal and resplendently beautiful Lake Pichola.Indian Visa fee International airfare to and from India All meals except breakfast Extra night accommodation if needed Excess baggage charges Travel and rescue insurance Personal expenses (phone calls, internet, laundry, bar bills, battery recharge, extra porters, bottle or boiled water etc.) Monument entry fees. Any other expenses incurred in the tour apart from those mention in the cost include part Any changes in the above due to political or natural disturbance.