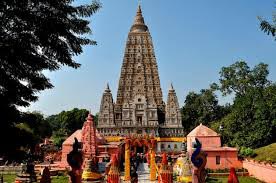 The word 'Buddha' is a title and not a name in itself. It means 'one who is awake' (in the sense of having 'woken up to reality'). The title was given to Siddhartha Gautama, who was born in Lumbini (Nepal), approximately 2,500 years ago. He did not claim to be a God and he has never been regarded as such by Buddhists. He was a human being who became Enlightened, understanding life in the deepest way possible. Siddhartha was born into the royal family of a small kingdom, on the Indian-Nepalese border. According to the traditional story, he had a cloistered upbringing, but was jolted out of complacency when he encountered the harsh realities of life, such as old age, sickness and death.

Emagic India Tours is a Young and Professional Travel Company Located in New Delhi and Has Five Years of Comprehensive Experience in Organizing Individual and Family Tours. At Emagic India Tours We Feel Utterly Complacent About Our Highly Experienced Team of Professionals and Ensure that Your Tour from Us Would Bring Happiness and Joy and Become Part of Your Many Sweet Memories. We are also Renowned Tourists’ Vehicles Operators in Delhi. Read More...