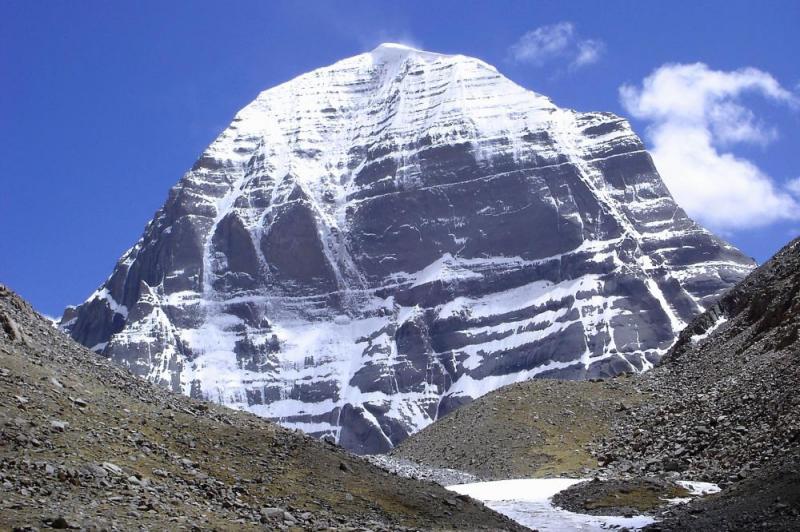 The Holy Mountain and Sacred Lake According to ancient Sanskrit documents, the Gangdise Range had become a holy Mountain as early as 2,000 years before Christ. The Hindu myth has it that the "palace" for the god of gods was built on the peak of Kailash of the Gangdise Range. This important mountain in Asian history with elevation of 6,656 meters is located in the county of Bruagn in Ngari area. The Tibetan Buddhists believe that the mountain is in the shape of an olive with a grand legendary palace on the peak. Four streams flow down the mountain from four sources, each in the shape of a horse, lion, elephant and peacock, which have given names to the four famous rivers in Ngari. The mountain "palace" was home to 500arhats. It is believed that centuries ago a visiting Bangladesh monk had heard chimes of bells and drum beats from the "palace". Pilgrims today still claim that a few lucky ones may hear mysterious sounds from the mountain. Kailash crowns the Himalayan Mountains with its myriad of myths and legends and remains the focus of the religious emotions of those who feel its pull. For centuries, pilgrims have come from afar to pay homage, praying for redemption by walking around this holy mountain of purity and benevolence. A full circle around the mountain takes from 24 hours to 36 hours. This tradition of worshipping was deep rooted in ancient pagan rituals and is still alive and strong today. One myth has it that Mila Xiba, a famous Tibetan monk, subdued a heretic in battle of faith and power on Mt. Kailash. The victory has been celebrated in every Year of the Horse when pilgrimage to the holy mountain is at its height. Lake Manasarova, one of the highest fresh water lakes of the world, is over 20 kilometers to the southeast of Mount Kailash with a total surface area of 400 square kilometers. This placid lake is a vast expanse of pristine water, absolutely beautiful under the vast and clear sky. The legend has it that Goddess Woma bathed in the lake. Because of its sheer beauty and charming myths and legends, the lake was mentioned as a celestial lake of the west in an ancient book written by Xuanzang, a Tang Dynasty monk known for his journey to India in search of Buddhist scriptures. The book was entitled "The Western Territories of the Great Tang Empire". The lake was already known to the Tibetans as Macuitso about nine centuries ago. It was believed that in the "palace of the dragon king" on the bottom of the lake were boundless treasures. The chosen ones after walking around the lake a full circle would be promised a life of plenty by a small fish, a pebble or a feather they might have picked up. After the triumphant rise of Buddhism in Tibet in the 11th century, the lake was given a Buddhist name "Manasarova", meaning "perpetually invincible". Thereafter, the lake has been regarded as a gift from Buddha with cleansing and redeeming power that will bring spiritual and physical well-being. The lake has thus gained a primordial force, which, together with the Holy Mountain Kailash, has attracted countless pilgrims to the area of Ngari. They would take the strenuous journey around the mountain and lake as a test of their faith and for an experience of the holy power. Many of them have harbored the wish of bathing in the lake for many years. There are four holy bathing spots around the lake respectively named Lotus, Fragrance, Purification and Faith. Bathing at each spot while trekking around the lake would redeem different sins. The mysterious powers of Lake Manasarova are believed to be just as great as those of the towering Mount Kailash.

ADVENTURE TREKS NEPAL designs tailor-made active travel experiences in wild and wonderful destinations in a manner that is organized, safe and without losing its sense of freedom. Read More...