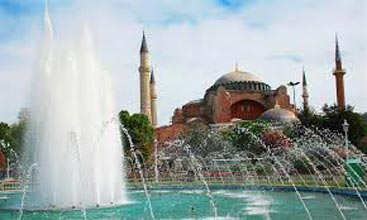 Istanbul 4 Day Sightseeing Tours is beautifully constructed so that you see all the most significant sights of Istanbul aided by an expert guide , ensuring you retain an understanding of its History and Culture

The Istanbul 4 Day Sightseeing Tour is a beautifully constructed programme making the best use of your time.

You will see all of the most significant sights of Istanbul aided by an expert guide ensuring that you retain a good understanding of the History and Culture. An unmissable excursion whether an expert or novice!

See the best of istanbul on a 4 day package tour
Visit city icons, such as the Blue Mosque and Hagia Sophia
Shooping at famous Grand Bazaar.
Cruise the bosphorus.
Visit 2 continents in one day.
Enjoy panoramic views from camlica hill.
Watch master craftsmen at work.

Istanbul is Turkey’s largest city and the only city in the world to straddle 2 continents with this 4-day sightseeing tour, you will explore it in full, visiting such iconic highlights as the hagia sophia, blue mosque, hippodrome, and rumeli fortress. you will stroll through atmospheric bazaars, such as the fragrant egyptian bazaar, and the amazing covered grand bazaar, and cruise along the bosphorus, visiting europe and asia on one tour.Gratuities, Personal Expenses
Drinks