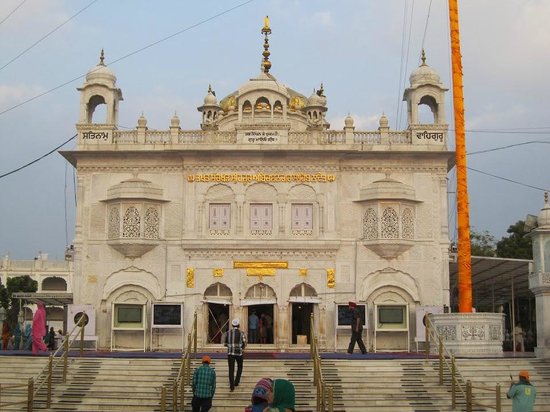 Takhat Sachkhand Sri Hazur Abchalnagar Sahib is the principal shrine at about half a Kilometer from the left bank of the river Godavari, Nanded, Maharashtra. It marks the site where the Guru had his camp in 1708 A.D. after the departure of the emperor Bahadur Shah. The tenth Guru held his court and congregation here. It is the site of his own tent where he was convalescing after he was attacked by assassins. It is the place from where the tenth Guru rose to heaven along with his horse Dilbag. In 1708 being prescient of the end of his earthly role, the Guru had despatched Banda Singh with five of his Sikhs to Punjab and Mata Sahib Devan under a separate escort to Delhi before the stabbing incident. He told the rest of his retinue to retire to their homes if they so wished, but he bade one Bhai Santokh Singh to stay on here and keep Guru ka langar going. many others also chose to remain. Together they built a room over the platform where the used to sit while holding his court and installed Guru Granth Sahib on it. They called it Takhat Sahib. Guru Gobind Singh, while conferring Guruship on the holy Book, had himself named Nanded as Abchalnagar (means steadfast city) after the first word of a hymn read at random on the occasion. Sachkhand (means region of Truth) had been used by Guru Nanak Dev to mean the abode of God. The present building of the Takhat Sahib was got constructed by Maharaja Ranjit Singh with money, artisans and labour sent from Punjab during early 1830s. The complex of the Takhat Sahib is spread over several hectares. Besides the Takhat Sahib proper it also includes two other shrines, Bunga Mai Bhago ji comprising a large room where Guru Granth Sahib is seated and some historical weapons like steel quoits, a broad sword, a steel bow and an arrow, a gilded dagger-sized sword, a few swords and a mace are at display, and Angitha Bhai Daya Singh and Dharam Singh. These two survivors of the battle of Chamkaur, who were among the Panj Piare. Gurudwara Gupatsar Sahib, Manmad : Manmad Gurudwara is situated at Manmad which is a major junction on Delhi to Mumbai route. Before starting of Sachkhand Express, pilgrims had to change the train at this station to travel to Shri Hazur Sahib, Nanded. Guru Gobind Singh Ji brought two royal prisoners from Satara Fort by air route here by holding the stir rups of his horse. The names of the prisoner were Balarao and Rustumrao. There was then very dense forest at the place of Manmad Gurudwara. Sant Baba Nidhan Singh Ji started karseva for constructing Gurudwara here by clearing the dense forest with the help of his people. Hidden Bauli was found while constructing the Gurudwara. After cleaning the well, it was noticed that the water of the well is divine and sweet. Because of this hidden well (Gupta Kuwan) the Gurudwara is later named as Gurudwara Gupatsar Sahib. (We also organise tours for Manmad Gurudwara with Hazur Sahib Tours)Entrance fee to monuments. Any meals except specified in the itinerary. Tips, Beverages, Laundry, Telephone Calls, etc. Medical and Insurance.

Enquire Rates for more than 6 Persons.