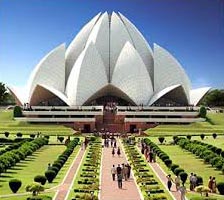 Delhi, as the national capital, is completely filled to the brim with some of the most amazing sights. We understand that many tourists have no time to visit the city at length, thus we have come up with same day Delhi tour package. We are a one stop destination for all those who want to explore the capital of India, Delhi in a day. This one day sightseeing tour of Delhi is easily the best way to cover the major highlights of the city's attraction.

Other Terms & Conditions :
Price based on minimum 02 people required. Surcharge will be applicable on single person travelling.