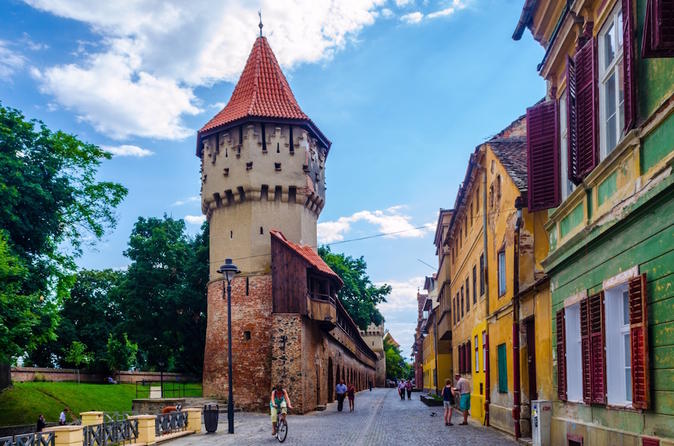 Offered by : Your Guide in Transylvania 0/5

Sibiu or Hermannstadt as It Was Called By the Saxon Colonists, the Capital City of Transylvania, Founded in 12th Century or Even Earlier It is Considered Today One of the Most Beautiful Historical City Not Only in Romania But in Entire Europe. in 2007 Sibiu Was Designated European Capital of Culture and in 2014 the Old City of Sibiu Was Ranked as “europe’s 8th Most Idyllic Place to Live” By Forbes. More Than that You Should Know that Romania`s First Hospital (1292), Pharmacy (1494), School and Library Were all Established in Sibiu among the Endless Historical Highlights of this City We Will Visit the Large Square Existing Since 1366, the Little Square Which is the Second Largest Historic Place of Sibiu and One of the Most Beautiful in Town and Huet Square, Dominated By the Evangelic Church Built Between 1320 and 1520, Which Makes It Oldest Church in Sibiu and the Liars’ Bridge Which is the Oldest Cast Iron Bridge of Romania, Built in 1859. after the Tour of Sibiu Old Town We Will Visit the Astra Ethnographic Museum Which is the Second Largest Open Air Museum in the World and the Biggest One in Europe (250 Acres) Located in a Magnificent Surrounding, in the Middle of a Dense Forest Called Dumbrava and Surrounded By a Beautiful Lake. this Museum Features More Than 300 Traditional Households as Well as Wooden Churches, Watermills and Windmills, Large Presses for Wine and Oil, Hydraulic Forges and Houses Representing Different Vernacular Architectural Styles of Historical Regions of Romania with Over 10 Km of Walkways Between Them . in Sibiu Art Lovers Can Visit the Brukenthal Museum Which is the Oldest Art Museum of Romania, Founded By Baron Samuel Von Brukenthal , the Habsburg Governor of Transylvania and Who Established Its First Collections in 1790 Which Makes this Museum to Be Three Years Older Than Louvre Museum in Paris. here Ones Can Admire the Art Galleries Located Inside the Brukenthal Palace that Feature a Number of About 1,200 Works Belonging to the Main European Schools of Painting, from the 15th to the 18th Century: Flemish-dutch, German and Austrian, Italian, Spanish and French Schools. the Galleries also Include Impressive Collections of Engravings, Books, Numismatics, and Minerals. at the End of this Tour I Will Give You Some General and Some Customized Tips as I Don’t Want You to Enjoy Just the Time We Spend Together, But Your Entire Stay in Transylvania or Romania. this Tour Can also Be Used as a Transfer to or from Sibiu Especially By Those Tourists Travelling Further to Budapest By Train.

Your Guide in Transylvania View Profile


About Your Guide in Transylvania

More Packages by Your Guide in Transylvania