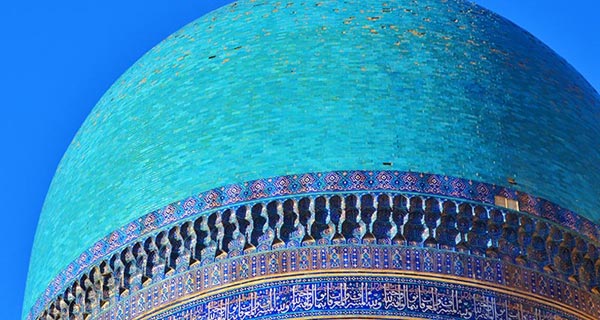 Uzbekistan and Turkmenistan are central links along the Silk Road and have extraordinary histories, from the great empires and conquerors of the ancient and medieval world, to the migrations and exchanges between vastly different cultures. Nevertheless, these two countries have retained their distinctive cultures, seen most clearly in their traditional arts and crafts. This 18-day tour uncovers the wealth of history and culture in the ‘Stans’, with visits to the Silk Road cities of Khiva, Bukhara and Samarkand, to Sasanian citadels, Achaemenid and Parthian ruins, the palaces of the emirs and the desert oasis of Merv.

Admire archaeological sites at Shahrisabz and Tamerlane’s Samarkand, the heart of the Silk Road
Bukhara’s Samanid monuments, vestiges of the last Persian dynasty to rule Central Asia
Outstanding examples of Sasanian and Achaemenid cities at the oasis city of Merv
Ruins of ancient Parthian kings, dating from the 3rd century BC, at Nisa near Ashgabat
Fine Central Asian architecture and design at the World Heritage-listed site of Kunya Urgench
The extraordinary city walls of Khiva old town, and its mosques, minarets and madrassasReturn international/domestic air travel unless those flights take place during the tour
Special taxes and airport levies that can only be paid in cash at the destination. We will advise you of these charges (if any) before you depart
Costs involved in obtaining visas for countries visited, where required
Travel insurance. We require all participants to have comprehensive travel insurance. A typical policy for one of our tours will cost from $160 upwards, depending on your age, pre-existing medical conditions, the countries you are visiting and the overall length of your trip
Lunches and dinners not specifically mentioned as included in the itinerary
Personal expenses such as laundry and phone calls
Costs associated with any activity mentioned as “optional” in the itinerary, or any suggested free time activity