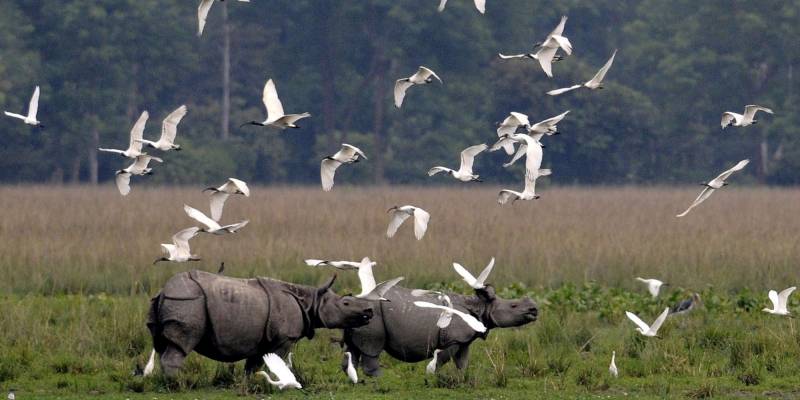 This tour is a mix of both popular destinations and remote places of Northeast India, and is a great way to start exploring the region’s richness and secrets, through biodiversity rich rain-fed forests, grasslands, mountain landscapes and also remote tribal villages where indigenous tribespeople live a simple and sustainable lifestyle.

It covers the wildlife areas in the state of Assam, along with cultural experiences with the tribes in Arunachal Pradesh and Nagaland. By the end of the many safaris and nature treks of the tour, you would have encountered a myriad species of wildlife such as rhinos, elephants, leopards, flying squirrels, deer, elephants and otters to name a few. The variety in bird-life of the region is equally spectacular with many hundreds of species of birds and numerous colorful migratory birds. And then there are chances of seeing a fascinating river dolphin or perhaps even the majestic tiger. In total, you will be visiting five of the best national parks of the region, namely Kaziranga National Park, Manas National Park, Nameri National Park, Dibru-Saikhowa National Park and Namdapha National Park. Of these, Manas and Kaziranga are UNECO World Heritage Sites which nature lovers across the world routinely visit. The variety in vegetation and landscape of these natural places will leave you immersed in their beauty, from deciduous forests, tropical and sub-tropical forests, grasslands, islands and rainforest in the foothills of the eastern Himalayas. Trekking through the dense rainforest of Namdapha and camping in the beautiful riverside locations is also an incredible experience of being surrounded by pristine greenery.

Amongst the tribes, you will meet various tribes of Assam such as Mishing, Deori and Sonowal Kachari on the spiritual island of Majuli which is located in the middle of the mighty Brahmaputra River. Experience a rural stay in traditional bamboo cottages and also relish the ethnic delicacies. One can also enjoy traditional dance performances of the tribes. In the quaint Himalayan valley of Ziro in central Arunachal Pradesh, you will get to meet and interact with the Apatani tribespeople who are one of the most fascinating tribes of India. They have various intriguing customs, such as the Apatani women who wear huge nasal plugs and have facial tattoos. It would also be a memorable experience to learn from them about their ancient religion and folklore. Lastly, in the faraway villages of remote Mon district in the hills of Nagaland, you will live amongst the tattooed Konyak tribe who are again a very fascinating tribe. They follow a very traditional way of life and were once headhunters and are considered to be one of the fiercest tribes of Northeastern India.

Experience an incredible long road trip across jungles, valleys and mountains crossing right through the heart and breadth of Northeast India, and discover both the fascinating cultures and environment that make this region so beloved.

Greener Pastures is a small sustainable travel company based in Northeast India which promotes responsible tours and adventures to exotic places, with a prime focus on uplifting local communities and safeguarding the environment. Read More...