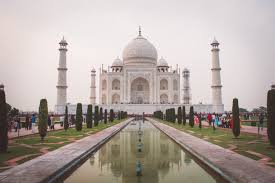 The Colorful Rajasthan with Varanasi Tour is colorful for a lot of reasons. For one, Rajasthan is a glorious land of surprises; it is also a land of enthralling natural beauty and diversity that can easily fascinate even the most seasoned traveler. It is a magnificent land of numerous historic monuments including palaces, forts, temples, etc. with esoteric architecture, exemplary bravery and gracious and debonair lifestyles of Rajputs, and of rich cultures. Those looking for the taste of royal lifestyle just need to enter in any of the several palace hotels or heritage hotels that cordially treat all the tourists like royal guests. Two- You get to see the Taj Mahal, the one thing you`ve been waiting for ever since you boarded your flight to India. Well what can we say, for no amount of words can ever take away the delight every visitor experiences when he sees the TAJ MAHAL. Sail the Ganges to holy Varanasi. We know you`ve heard about it and read about it but when you see it.......takes your breath away.