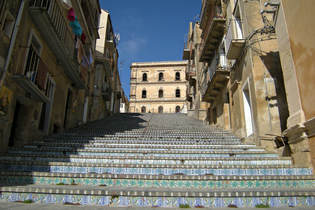 A Taste of Southern Sicily By Bike Tour

Palazzo Biscari in Siracusa.
​The "scalinata" in Caltagirone.
The historic centre of Ragusa.
The Cathedral of St. George in Modica.
The Basilica of Santa Maria and The Mother Church of Saint Bartholomew in Ispica.
​The Cathedral of St. Nicolò in Noto.

Tour type: Self-guided Tour
Duration: 6 days / 5 nights
Departures: any day in the week all year long.
Participants: Minimum of 2
Level of difficulty:
Bikes: Hybrid Bike, Roadbike, E-bike
Offered Service: Bed and Breakfast
Luggage Transportation: Your luggage will be delivered to your next accomodation every day.