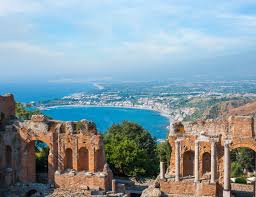 Tour Overview: Sicily, the Crossroads of the Mediterranean, is a Mosaic of Cultures East and West. We’ll Discover Phoenicians At Mozia. Greeks At the Valley of Temples in Agrigento. Romans At Piazza Armerina’s 3rd Century Villa Del Casale. Norman Kings and Arab/byzantine Influence At the Cappella Palatina Palermo and the Cathedral and Cloister At Monreale. Aristocratic Palaces At Ragusa. Along the Way We’ll Visit a Salt Museum At Marsala, View An Historic Puppet Show Performance At Ancient Siracusa, Take a Cable Car Ride Up Magnificent Mt Etna, Stay 3 Nights in Sparkling Taormina, have a Taste of Etna’s Wines and Experience Exquisite Southern Cuisine. Sicily is a Trip!