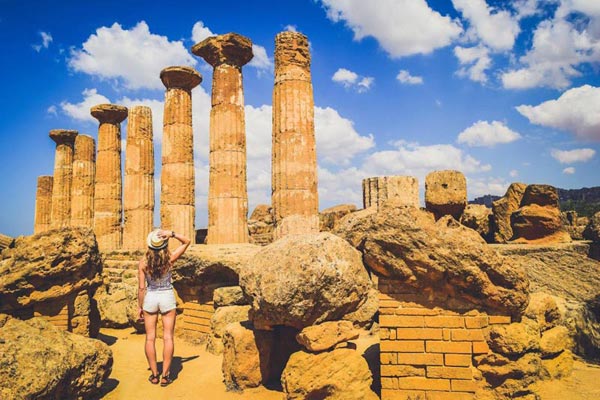 Sicily has been one of the most sought-after places in the Mediterranean. Phoenicians, Greeks, Romans, Byzantines, Arabs, Normans and Spaniards have each settled here, making it one of the most culturally dense and diverse regions of modern Italy. The setting for this long and distinctive history is unmatched – the towering volcano of Mount Etna, rolling hillsides in the interior and the dramatic coastline. Discover the beauty, history and culture of Sicily – from ancient cities and Greek temples, to Norman mosaics and elegant baroque towns – on this new 13-day tour, timed to take advantage of low-season visitor numbers and mild weather.

Explore
The history, art and architecture of Sicily, showcasing more than 3,000 years of Mediterranean civilisation
The island’s rich classical heritage at some of Europe’s best preserved Greek and Roman archaeological sites
Palermo’s extraordinary history, where medieval Arab and Norman rule is seen today in distinctive art and architecture
Varied and dramatic landscapes, from active volcanoes to rugged seaside cliffs and pristine coastlines
The benefits of low-season travel, with fewer visitors and mild weather
HIGHLIGHTS

Exceptionally well-preserved Greek and Roman archaeological sites in Siracusa, Agrigento and Taormina
The exuberant ‘Sicilian Baroque’ architecture of Siracusa and Noto
Delightful 4th-century mosaics in the palatial Roman villa at Piazza Armerina
Agrigento’s ‘Valley of the Temples,’ including some of the world’s finest surviving examples of Greek architecture
The remarkable medieval Arab-Norman architecture of Palermo
UNESCO World Heritage-listed mosaics in Monreale and in Palermo’s Palatine Chapel, undertaken by Byzantine masters for their Norman rulers
Sicily’s excellent wines and Arab-influenced cuisineReturn international/domestic air travel unless those flights take place during the tour
Special taxes and airport levies that can only be paid in cash at the destination. We will advise you of these charges (if any) before you depart
Costs involved in obtaining visas for countries visited, where required
Travel insurance. We require all participants to have comprehensive travel insurance. A typical policy for one of our tours will cost from $160 upwards, depending on your age, pre-existing medical conditions, the countries you are visiting and the overall length of your trip
Lunches and dinners not specifically mentioned as included in the itinerary
Personal expenses such as laundry and phone calls
Costs associated with any activity mentioned as “optional” in the itinerary, or any suggested free time activity