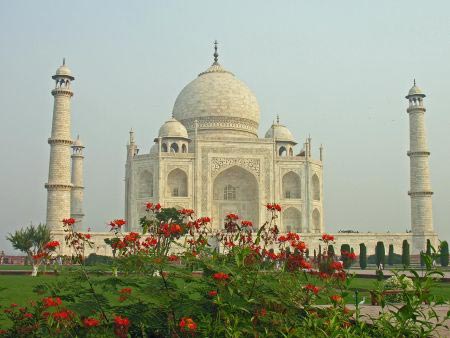 Agra the former capital of Hindustan is a city on the banks of the river Yamuna in the northern state of Uttar Pradesh, India. Shah Jahan, known for his keen interest in architecture, gave Akbarabad its most prized monument, the Taj Mahal Built in loving memory of his wife Mumtaz Mahal, the mausoleum was completed in 1653. Mathura the birth place of Lord Krishna, is located in uttar pradesh on the west of the river yamuna besides being a hindu pilgrimage, this north - Indian city is the center for administration of the mathura district. Agra attractions Taj Mahal - Is one of the most famous tourist attractions in India and across the world. It's one of the Seven Wonders of the World. Completed in 1653, The Taj Mahal was built by Mughal Emperor Shah Jahan in memory of his beloved wife Mumtaz Mahal, as a symbol of eternal love. Taj Mahal is built on a red sandstone base, topped by a huge white marble terrace on which rests the dome flanked by four tapering minarets. Agra Fort - Agra fort was commissioned by the great Mughal Emperor Akbar in 1565. During Shah Jahan's era, the red sandstone fort was reformed into a palace and extensively repaired with marble and pietra dura inlay. Mathura attractions Krishna Janmabhoomi - Temple is located in Mathura near the railway station. This Temple is distinguished as the place of birth of Lord Krishna. It is a popular belief that nearly 5000 years ago Lord Krishna was born in the prison of King Kansa in Mathura. Dwarkadheesh Temple - Temple is located near the eastern banks of river Yamuna in Uttar Pradesh. The temple was constructed in 1814 and is located at a central place in the city of Mathura. Gita Mandir Mathura - Situated at a distance of five kilometers from Mathura in Uttar Pradesh and is one of the most popular attractions of Mathura. The magnificent mandir was built by Birla, one of the leading industrial powers of India. The excellent architecture of the temple attracts tourists from all over India.Any meals other than those mentioned above Any train fare or airfare Other transportation that is not mentioned in the itinerary Entrance fees to the monuments, amusement parks & boating charges Any other charges like portage at the airports and hotels, tips, insurance, mineral water, wine, telephone charges, and all items of personal nature Any other services apart from those mentioned in inclusions Any other expenses caused by factors beyond our control like rail and flight delays, roadblocks, vehicle mal-functions, political disturbances etc GST applicable on total package cost