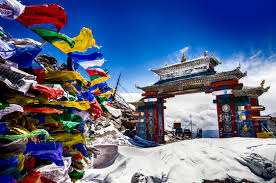 Route:
Airport pickup at Guwahati and will move towards Balipong hold for a night at Balipong.Balipong to Bomdila sightseeing one night hold in Bomdila, Bomdila to Dirang and Dirang sightseeing and one night hold in Dirang, Dirang to Tawang and Tawang sightseeing four night hold in Tawang, Tawang to Bomdila one night hold in Bomdila,Bomdila to Guwahati and Drop at Guwahati. We the Variant Arunachal Explorer is a Government affiliated tour operator bearing registration no. BGA/TL-BDL/2017/001 and our Main office is located at Bomdila, near forest check gate, West Kameng Dist. Arunachal Pradesh. Our Tour Guides and Tour Agents are highly trained and equipped in basics as well as advance training in this field with finest knowledge about the terrains. We have hand picked some of the leading names in this department as our associates and partners, because travelling is more then sight seeing: it is a change that goes on, deep and permanent, in the ideals of living. We also have a team for research and analysis on route finding and adventure tour trip in order to make your trip a memorable one, we design and plan our route for you to see from your perspective and enjoy even the smallest detail, in short we don’t limit our trip only what you came to see but we focus on more than that. The foundation of our Travel Agency is to build trust and good rapport so you are never alone in your trip and everyone needs a good friend to trust on. As a local saying goes, “a good trip to a new place, changes a man for good” and it does motivate our team for the toilsome deliberation we put on to make your trip an adventure, and we know that many a times our heart needs more then what our mind knows.
And the Team Variant Arunachal Explorer wishes you to have a memorable experience with us.

Other Terms & Conditions :
Above rates are calculated on the basis of hotels mentioned.

The Variant Arunachal Explorer does not have any HIDDEN charges.

During the journey if someone asks for extra money, Please inform us and we will not be responsible if you pay the amount without our concern.

Booking will be confirmed only after receiving the advance payment.

In case of non availability of rooms in the mentioned hotels, this will be communicated to you and we will provide other options.
In case you are not convinced with the new options, advance paid will be refunded to you without deducting any service charge and this need to be communicated to us in one day’s time after receiving the new hotels.
There will not be any change in the hotels mentioned without your concern.

Meals those included in the package will be served at the hotel or at any of our other tied-up restaurants.
Hotels for each category are selected as per the budget and through our feedback system.

We suggest you to check reviews and location of hotels mentioned to make sure it is as per your preferences before confirming the package.
Any extra breakfast for kids which is not mentioned has to be paid directly by guest as per the hotel policy.

Star category hotels are not available in certain places. However, we provide the best possible option as per your tour category.

As per Tawang local laws, outside vehicles are not allowed for local sightseeing. Therefore we have to arrange different local vehicle for Tawang-Bumla sightseeing.

The Variant Arunachal Explorer has the right to upgrade any hotel room type or vehicle type without charging extra amount from the guest. However, we never downgrade the same.

The Variant Arunachal Explorer is not responsible for acts of God or force major events, sanitation problems, lack of medical care, ,
weather conditions, strikes and other labour activities, acts of terrorism, acts of war (declared or undeclared), quarantines, embargoes, blockades, criminal activities or any other act or event beyond the direct control of The Variant Arunachal Explorer.

Thank you & wishing you happy holidays with The Variant Arunachal Explorer.

Exploring Arunachal Pradesh and witnessing the sizzling beauty of this part of the world is always fun. The number of travelers coming to Arunachal Pradesh each year has increased as well. Travelers love to come to this state of the nation to enjoy and experience the best moments of togetherness with their families and friends. If you are also planning a trip to Arunachal Pradesh then don’t forget to approach Arunachal Explorer. We are a client-centric firm which is actively engaged in offering a wide variety of travel services to the clients at affordable charges. Read More...