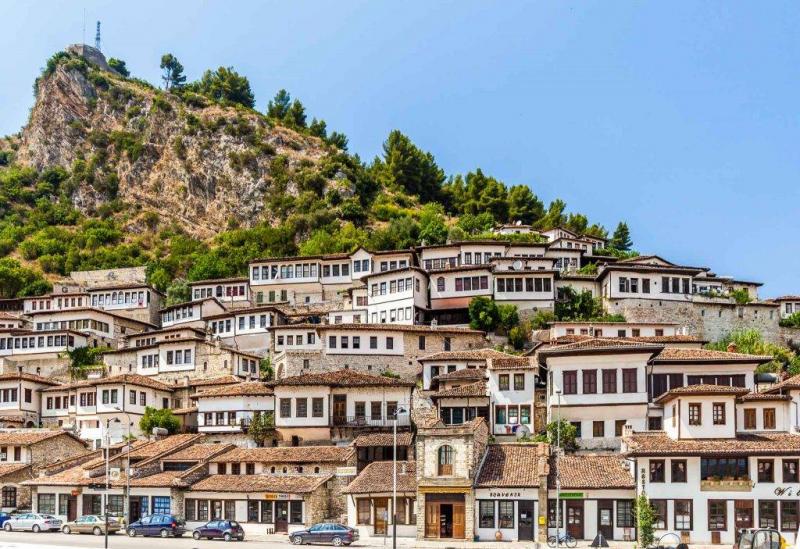 Departure for trip to the main interesting objects of Vlora & Berat. Vlora – also known as Vlore or Valona- is a south-Albanian city of approx. 94,000 inhabitants and one of the oldest Albanian cities. Albania’s 2nd largest port is situated here, the largest one is situated in Durres. Vlora is situated at the Bay of Vlorë, and is surrounded by mountains. A particularity of this bay it is that it is considered as the frontier between the Adriatic Sea and the Ionian Sea. The island of Sazan is close-by, at the entrance to the Bay of Vlorë. Italy is just 70 miles away. All around the town you’ll find gardens and olive groves. While you are in Vlora you could visit : The Museum of Independence, the building where Albanian independence was proclaimed on 28 November 1912. This building is shown as well on the 500 Albanian leke banknote since 1996. The Mosque of Muradie - This sultan-style mosque is an rather important religious monument for the locals. The dome that was built in 1542 by the architect Mimar Sinani and is build of carved stone. This monument is well known because of the harmonious distribution of its windows. Flag square , Monument of Independence & Bay of Vlora & Kuz Baba to enjoy the scenery of the city from the above the hill. Berat – It situated round 100 km far from Vlora . It is known as the “City of one thousand windows” and is declared a Museum City”. Berat, overshadowed to the east by Tomorr Mountain 2415 m, and is an ancient Illyrian settlement founded in the 4th & 5th centuries B.C. on the territory of the Illyrian tribe of Desarettes. The town is composed of 3 parts; Gorica, situated on the far side of the river; Mangalem, situated on the fortress side of the river and the Residential quarter within the fortress known as KALAJA. The old part of the city has some religious buildings like mosque and Byzantine churches. The old name of the city was Antipatrea.