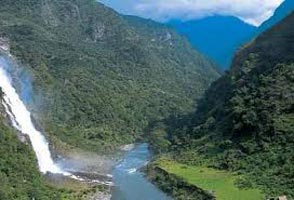 In Arunachal Pradesh no star category hotels are available. We will introduce only one category (Deluxe) in our Arunachal package with best available hotel in that region.
Guwahati:
Guwahati, the capital city of the northeastern state of Assam, was formerly known as Pragjyotishpur (the City of Eastern Light). Located on the bank of the Brahmaputra River, Guwahati is also the largest city of Assam. This city is also the second largest metropolitan area in entire Eastern India. The gateway to the seven other northeastern states, Guwahati is a vital tourist link point, besides being an attraction in itself.

Kalakshetra - Shankardev Kalakshetra is an Assamese cultural museum in the Panjabari area of Guwahati, India. It includes an art gallery and a children's park. It is named after the great Vaishnavite reformer of Assam, Shankardeva. The artistic excellence of Assam and rest of the north-eastern region is displayed here.
Kamakhya Temple - The Kamakhya Temple is a Sati Pith temple situated on the Nilachal Hill in western part of Guwahati city in Assam, India. It is the main temple in a complex of individual temples dedicated to different forms of the mother goddess as the Dasa Mahavidya, including Bhuvaneshvari, Bagalamukhi, Chinnamasta, Tripura Sundari and Tara. It is an important pilgrimage destination for general Hindu and Tantric worshipers.
Balaji Temple - Tirupati Balaji is a magnificent temple at Lokhra, near Guwahati, in Assam. It is dedicated to Lord Venkateswara, and is a holy place for the pilgrims from the north-east. The sanctums of Lord Ganesh, Lord Balaji and Goddess Durga can also be seen here. The architecture of this temple is unique, and takes after the South Indian temples.
Nabagraha Temple - The temple is dedicated to Lord Shiva who is worshipped here in the form of nine shivlings, representing the nine planetary gods of Hinduism. Each shivling is wrapped in a cloth having a specific color. Each of these colors symbolizes one of the nine planets. The temple was built in 1752.

Optional sightseeing with additional cost
Sukresvara Temple - This temple is situated on the banks of Brahmaputra River. This temple is dedicated to Lord Shiva. It contains one of the largest Linga in India. This temple was constructed in AD 1744.
Assam State Museum - Established in 1940, it is one of the biggest multipurpose museums in the country. The museum has separate sections for archaeology, epigraphy, numismatics and iconography. The collection includes archaeological, wooden and bell-metal objects, ivory, terracotta, pith, tribal objects and dioramas of tribal life. Painting, old textiles, arms and weapons, ethnographic objects and stone sculptures are the other artifacts on display.

Kaziranga:
In the heart of Assam, located on the banks of the mighty Brahamputra River. It is inhabited by the world's largest population of one-horned rhinoceroses, as well as many mammals, including tigers, elephants, panthers and bears, and thousands of birds. With Open country covered mostly with elephant grass, Kaziranga gives visitors a chance to see the fauna at fairly close quarters. The total number of rhinoceros in the park is 70 percent of the total population of this species in the world. The values and criteria made Kaziranga National Park to get inscribed in the World Heritage Site List 1985.
Note: Jungle Safari in Kaziranga National Park officially opens from 01st November.

Nameri National Park:
Nameri National Park is located in the foothills of the eastern ranges of the Himalayan Mountain Range. The forests are home to a host of different animals. The national park is home to a substantial population of elephants. Some of the other animals that can be seen here are leopards, bisons, wild boars, black bears, giant squirrels, capped langurs and sloth bears. There are a few species of birds that are present here as well. One can see hornbills, wood ducks, plovers, bee eaters and babblers. Safaris can be arranged in the park and this is the best way to see the place. Jeeps and SUVs are used for these safari rides and they are protected on all sides with an iron grill.
The park is also home to evergreen forests and they are lush green for many months of the year. Some of the most popular activities in the park include white water rafting and angling. There are several spots that are ideal for angling. However, one has to obtain permission from the forest department for angling. Families can also swim and sunbathe in certain sections of the park.

Shillong:
The romantic city of Shilong is one of the important tourist destinations in the northeast. It is often referred to as the "Scotland of the East" due to its striking similarity with the Scottish highlands. Shillong is the capital city of Meghalaya as well as the District headquarter of East Khasi Hills District.

Umiam Lake - Umiam Lake, also known as Barapani (Big Water) is a spot around 15 Km from Shillong where a massive hydro-electric dam has been constructed across the Umiam river stream. The Lake is popular for the Water Sport and adventure facilities that it offers. Kayaking, Water cycling / scooting and boating are a few of the facilities available at the Umiam Lake.
Lady Hydari Park - A popular spot both with locals and tourist, it is located in the heart of the city with an abundance of plants and flowers. The best months to see the flowers in bloon are April and October.
Ward's Lake - A beautiful manmade lake named after Sir William Ward, the then, Chief Commissioner of Assam. A beautiful little lake with short garden walks and boating facilities - this is a popular spot for both local and visiting tourists.
Cathedral Catholic Church - In the heart of the city, there stands a beautiful cathedral of Roman Catholics dedicated to Mary Help of Christian.
Don Bosco Centre for Indigenous Cultures - A three-in-one Institution combining a museum with a research and publication centre, for promoting and preserving the rich cultural heritage of North East India - a unique fusion of all the sister states under one roof. Its seven floors represent the seven states of North East India.
Golf Course - Shillong Golf Course one of the oldest and best natural golf course in the world is considered to be the "Gleneagle of the East" by the United States Golf Association and Museum. The site where the Golf Course is located provides a scenic view. It was set in an undulating valley covered with thick groves of pine and rhododendron trees at an altitude of 5200 ft in 1898 as a 9 (nine) hole course and later converted into a 18 (eighteen) hole course in 1924.
Elephanta Falls - 12 kms on the outskirts of the city the mountain stream descends through two successive falls set in dells of fern-covered rocks.
Shillong Peak - An ideal picnic spot, 1965 metres above sea level and 10 kms from the city, offers a panoramic view of these country side, and is also the highest point in the State.
Cherrapunji (Full Day) - Cherrapunji is Located on the eastern side of India, Cherrapunji has pristine beauty, as these hills are not yet exploited. It is the only place in India that experiences monsoon throughout the year. High above the hazy valleys and foaming rivers, hidden in the rolling clouds and perched on an headland, lies Cherrapunji, 4,500 ft above the sea level. Cherrapunji, locally and officially known as Sohra, in the north eastern state of Meghalaya is a spectacular location with the year-round rain. This is a stunning location and the year-round rain earned Cherrapunji coveted entry long ago into the Guinness Book of World Records as the wettest place on earth, the place where the rainfall can be recorded in feet rather than in millimeters. In Cherrapunji you can see Nohkalikai Waterfalls, Eco Point, Mawsmai Caves.

Optional sightseeing with additional cost
Mawsynram (Full Day) - The winding roads of the hilly terrain with scenic view of the picturesque snow covered ranges, orchids blooming over treetops and gentle streams rushing out to meet roaring waterfalls, are breathtaking for every wanderlust who make their way to Mawsynram. Another breathtaking, wondrous place of Meghalaya, Mawsynram is a small village in the Khasi Hills about 56 kilometers from Shillong. It is reportedly the wettest place recording the highest rainfall of 11.872 meters but since it has no meteorological department in the area, Cherrapunji is still officially considered the place recording world’s highest rainfall.

Mawlynnong (Full Day) - Mawlynnong Village has earned the distinction of being the cleanest village in India. It is situated 90 kms. from Shillong and besides the picturesque village, offers many interesting sights such as the living root bridge and another strange natural phenomenon of a boulder balancing on another rock. Mawlynnong nestled in the pristine hill state of Meghalaya, is along the India-Bangladesh border. This cute and colourful little village is known for its cleanliness. Discover India magazine declared the village as the cleanest in Asia in 2003.

Everyone makes it a point that dirt and waste are not thrown everywhere. All the waste from the dustbin is collected and kept in a pit, which the villagers use as manure. The villagers are now on a mission to ban plastic. The village with cent per cent literacy is conscious and they are spreading the message of conservation and protection of the forest. Locals plant trees to ensure that the virgin forest is kept intact and also replenished.

Bhalukpong:
The main places of interest in Bhalukpong are the picnic spots along the charming Kameng River and the nearby forests. Travelers can enjoy the panoramic view of the mountains surrounding Bhalukpong and its environs. There are a number of trekking and hiking trails in and around Bhalukpong. Adventure seekers can enjoy fishing and angling along different stretches of Kameng River.

Bomdila:
This small town is famous for Buddhist Gompas and the magnificent view of the Kameng Valley. The view of clouds gathering at the top of the Nechipu Pass can be easily seen from the highest point of this place. The area is also home to the Kangto and Gorichan peaks, which are considered as the highest peaks in the state. Bomdila is also famous for apple orchards.
INDEX

Tawang:
Tawang is birthplace of 6th Dalai Lama, is one of the most beautiful places in Arunachal Pradesh. The destination is located at a height of around 11,500 ft. above sea level. Tawang shares its border with Tibet in north, Bhutan in south-west and Sela range in east.

The ever-windy Sela Pass, located about 13,700 feet above sea level on the eastern Himalayas, is said to be among the most difficult airspaces to negotiate even for the most experienced pilots.

Optional sightseeing with additional cost
Madhuri Lake - Surrounded by lush pine groves, the picture postcard Shungetser Lake in Arunachal Pradesh's, Tawang district was the perfect location for Bollywood diva Madhuri Dixit to sing “Tanhai tanhai tanhai...” in the film “Koyla”. The first Bollywood movie to be shot in pristine Arunachal attracted droves of tourists to Shungetser, a sacred lake for the Buddhist Monpa tribe of Tawang. However, after the film's shooting in 1996, the lake lost its original name. The notorious tour guides sold it to the tourists as Madhuri Lake, after the filmstar.

People around the globe have always enjoyed travelling. In fact, new lands were discovered around the world only because people started travelling from one place to the others. Life cannot be enjoyable without travelling and we all should make travelling a part of our lives. It does not matter where you travel, whether to a city within the country or to another country, but you should undoubtedly travel. Travelling not just gives you experiences and memories, but it also gives you knowledge about other people, cultures, food habits, natural beauty etc. And we, as a travel agent, make travelling interesting for you by designing and delivering amazing travel and tour services. With hard work and dedication, we give you the best of everything while you travel with us. Read More...