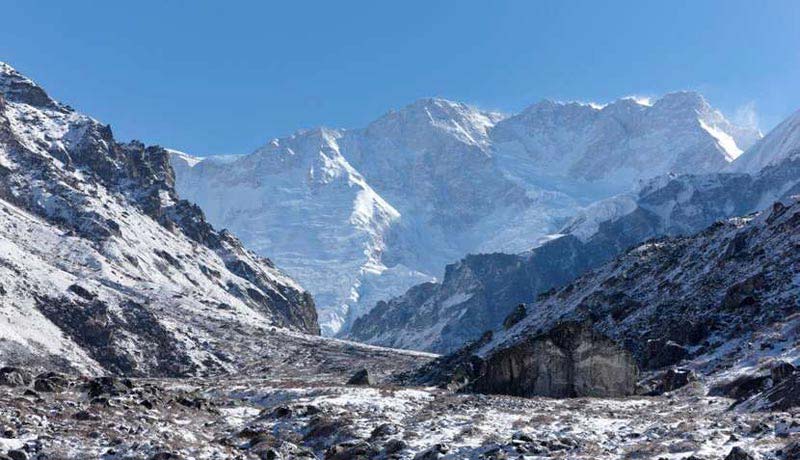 "Challenging Trek to the Himalayas lying in the Eastern Nepal, comprises very rarely frequented trails through Kanchenjunga Conservation Park and thinly populated villages of Rais and Limbus to the base camp of Kanchenjunga, the third highest peak in the world." Kanchenjunga refers to the mountain decorated with jewels. It is believed that the celebrated sage- Guru Padmasambhava buried the riches of his spiritual acquaintance deep down in these most beautiful mountains. It is so venerated by the neighboring inhabitants that the Lamas of Sikkim do a twelve-monthly accolade dance to this revered peak. The wild flowers are in bursting bloom during the months of April and May, and the clear views of the mountains are also more probable during this period. Much more than trek, it is a passage of several discoveries along the offbeat trekking trails of eastern Nepal. Breathtaking views of the cosmic Himalayan range can be seen from the majority of the route's trails. This is a thinly populated area with mainly Sherpa, Limbu, Rai and Gurung communities. The people are not accustomed to receiving tourists at their doorsteps and show great hospitality once they receive someone at their door. For an all-round trekking experience a stopover to either one, or both base camps of Kanchenjunga 8586 meters- the third highest mountain on earth, is always possible but our experience recommends to make the both base camps in a single trip. Once you get to the elevated parts of Kanchenjunga, you will find grand masses of Himalayan peaks surrounded by a number of peaks lesser in height but no less attractive. The trek is at times arduous but it passes through some wonderful remote villages and is never boring. Trip Length : 26 Days Activities : Trekking, Sightseeing Difficulty : Strenuous Max Elevation : 5140m Meal : Sherpa cooked 3 meals Accommodation : Tents Best Month : September-November & March-May Group Size : 2+Nepal Visa International flight to Kathmandu and return ticket to your Home country Entrance and monument fees during sightseeing Your meals at Kathmandu, except welcome dinner, farewell dinner and breakfast Entire cost of beverages, mineral water and beer etc. while on trek Travel insurance (Must include Helicopter evacuation and Trip Cancellation charges) Tipping to the guide and porter Any other expenses not stated in the "What is Included" list are your personal expenses

Access Nepal Tour & Trekking is one of the reputed tours and trekking companies in Nepal with the team of young and energetic, experienced tours and trek leaders!!! As Access Nepal has grown over the years, we strive to maintain a familiar approach to our every trips, every traveller to their incredible adventure trekking in Nepal Himalayas with fair price with responsible and eco-tourism. Also, as we are located in capital of Nepal at Kathmandu, in the heart of the Himalayas, we do always have our best trip operation in the Himalayas and we have maintained much closer contact with our every product offered and can truly boast that we are ‘experts’ in the region. Over the years as we have grown as a company, we have also grown in reputation. Access Nepal Tour & Trekking is renowned for its innovative tours & trekking, responsible and sustainable practices, as well as eco- tourism, with truly a socially responsibility and environmental aspects. We Provides Tour Operators Services. Read More...