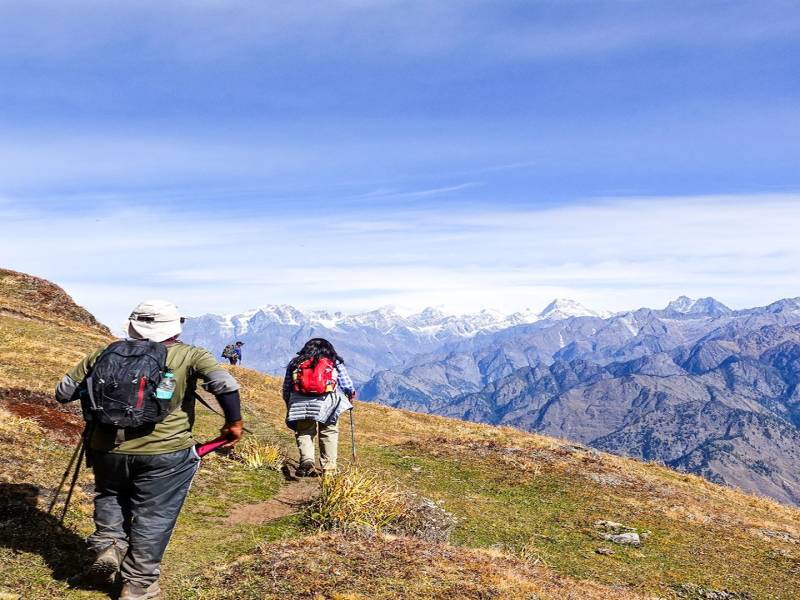 Kauri Pass Trek Has Been a Favourite with Many Mountaineers. Mr. Shipman in His Book- Nanda Devi Writes About Crossing this Pass with These Words, "the Top of the Pass Was Reached By 7 O'clock (am) of a Clear, Cold Morning and We Were Privileged to See What Must Be One of the Grandest Mountain Views in the World." It is a Fairly Moderate Trek, Which Offers Most Enchanting Mix of the Himalayan Life with a Look At Village Life, Culture, Pristine Wilderness, Wild Life and Great Himalayan Range. On a Clear Day One Can See Mountains like Nanda Devi (7816m), Dunagiri (7066m), Kamet (7756m) and Many More. highlights auli- a Winter Ski Meadow view of Nanda Devi- 7850m ghuni, Jhinji and Pana Villages interaction with Locals and Insight Into Their Lifestyle a Great Views of Most Highest Mointains of Uttarakhand highest Point 4800m note: 50% Advance Payment Confirms Your Booking. We Will Transport all Your Belongings for You So that You Only have to Carry Your Day Pack with Camera, Water Bottle and Jacket. We Serve Three Meals a Day Including Snacks and Drinks. We Provide a Variety of Tasty Healthy Food Including Indian, Chinese and Western Meals with Lots of Vegetables and Fruit.Accommodation in Rishikesh. Personal Insurance. All alcoholic beverages and personal expenses. Sleeping bags can be provided at an additional cost of Rs.100 per day.

Explore Himalayan Expedition is a famous name in the industry of tourism. The company is counted amongst the leading names in the travel industry of Uttarakhand. Being a client-centric firm, we always strive to provide the clients with the best-in-class travel services and attain the utmost customer satisfaction. We are credibly serving as a reliable tour operator and offering a wide range of tour packages to the clients. The list comprises honeymoon holidays, romantic holidays, family holidays, group holidays, etc. These tour packages are designed by consulting with the leading travel industry experts. We are providing car rental services to the clients. Moreover, our expertise in booking 2 star hotels, 3 star hotels, 4 star hotels, 5 star hotels, 6 star hotels and 7 star hotels has allowed us to gain a huge clientele all over Rishikesh. We are also serving as a commendable event planner and helping the clients in hosting grand and memorable events. Read More...