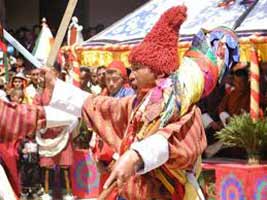 Main Highlights of Punakha Domchoe : Punakha festival consists of typical masked dances which are very colourful and interesting, the events and enactments are different on each day. Punakha Dromchoe is a five day long festival dedicated to the goddess Mahakala. The religious aspects are performed in the same manner as in early times. On the last day, a play of warriors going off to war is enacted. Date of this festival : Falls in February - March every year (ref festival calendar of Bhutan).