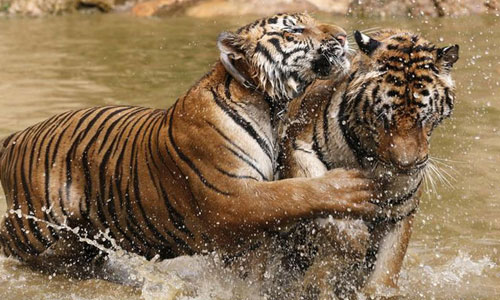 The natural wealth of the Indian subcontinent has remained unique, mysterious and fascinating for nature lovers. Variety of India’s wildlife can be seen in the 80 national parks, 441 sanctuaries and 23 tiger reserves established by the Government of India in an attempt to conserve this vital resource. If you are wildlife enthusiast and want to see wild animals in their natural habitat then India is a perfect place for you. Spot a striped predator amidst the tall grass or the wetlands, seeing herds of wild elephants and deer in their natural habitat, or watching a peacock dance in its entire splendor. Tigers are the most magnificent among all the cats, India holds over half the world’s tiger population commonly known as Bengal/Royal Bengal tigers.

India Leisure Tours Has Been in Business Since 2001 Providing World Class Services to Tourists in India from Across the Globe. We Understand the Needs of a Foreign Nationals and Leave No Stone Unturned to Give Them a Unique and Rich Experience of India. It is Our Hands On Experience in the Tourism Business that Helps Us Stay Ahead of Others in Our Trade. While Others are Run of the Mil, We Try to Be Different At all Stages. Read More...