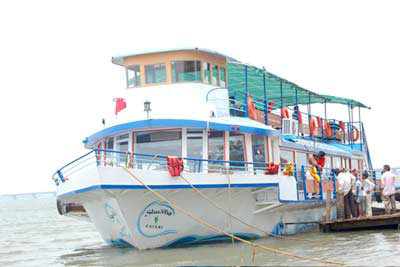 Yanam
Yanam is located on the Eastern coast of India, in the district of East Godavari of Andhra Pradesh. It is built at the place where the Gowthami branch of Godavari River confluences with the Bay of Bengal. The Godavari discharges itself into sea around 8 kms towards East of Yanam town. It lies on the spot where the Coringa River is separated from the Gowthami branch of Godavari River. The total area of the region is 30 sq. kms.Yanam was once a French colony and is presently a part of the Union Territory of Pondicherry. The French presence is seen in the stained glass work of the local church dating back to 1769 and at the French cemetery. Yanam has its share of fascinating stories about French ghosts haunting the French colony. The ancient church has a plaque paying tribute to a young French soldier by the name of Victor Simonel who died fighting heroically in a battle at the tender age of 22. This heightens the slightly melancholic mood of the place. Devotees stream in regularly offering prayers. The bright red French cap of the traffic policeman adds a sense of romance to all this.

Konaseema
Konaseema is popularly called as Andhra Kerala. Konaseema is a delta located in the East Godavari and West Godavari districts of Andhra Pradesh, India. This delta is surrounded on all sides by waters (of Godavari and the Bay of Bengal). Konaseema is famous for its scenic greenery, back water islands and vedic scholars. The origin of the name may be from Telugu word "Kona" meaning corner which resembles its shape. The northern side is bounded by Gautami Godavari and southern side is bounded by Vasista Godavari. It is one ofc most fertile lands present in Coromandel Coast. The entire region is rich in Coconut trees, Mangrooves, numerous canals, backwaters, Temples and Traditions. Coconut palms, the arboreal symbol of Konaseema landscape, fringe the backwaters framing the blue tropical sky during daytime and a starry twinkling firmament during evenings. There are diverse sceneries along the backwaters crisscrossing the coastal areas. The culture of konaseema is rich traditional culture of Andhra.

Backwater, Konaseema
Konaseema is known for its backwaters. They as a whole, form an intricate network of lagoons, lakes, canals, estuaries, and rivers that drain into the bay of bengal.. Boating along the backwaters offers spectacular views and vistas of konaseema' pristine natural beauty. Coconut palms, the arboreal symbol of Konaseema landscape, fringe the backwaters framing the blue tropical sky during daytime and a starry twinkling firmament during evenings. There are diverse sceneries along the backwaters crisscrossing the coastal areas. Cruising along the backwaters islands, wild life sanctuaries (Mada forest) from Yanam to Balusutippa, Masanatippa and Molletimoga is an ideal way to discover the real Konaseema.

The history of the Sacred Pilgrimage is exhaustively dealt within the 'Skanda Purana' of Sri Vyasa. Once Daksha Prajapathi decided to perform a Yaga. In pursuance of the same, he had been to Kailasa to invite Gods and Goddesses to sanctify his 'Yazna' and accept his hospitality. But when he had been there, Lord Siva was in his Court immersed in his spiritual splendour. But Daksha Prajapathi out of his ego of being the father-in-law of Lord Siva, mistook the Lord's trance as indifference towards him. So, being put out at the difference of his Son-in-law he came back without inviting the Lord and the Lady to his sacrifice.

Sati in her womanish nature requested Siva to permit her to attend, the sacrifice at her parental home, even uninvited and have the pleasure of the performance and the association of her kith and kin. But Siva explained her the tragic implications that she might have to face at her parental house and let her to at her own wish. But, when she actually stepped into her parental home, none greeted her or even just asked her a mutual exchange of her well-being.

Then Sathi was put out with the humiliation she had to face amidst her own blood and then and there, decided to give up her body instead of facing her beloved husband with a fallen face. So, she gave up her body then and there and fell down dead. Siva having come to know of the tragic end, sent his son 'Veerabhadra' to boot down the ego of Daksha. Siva in his pangs of separation with Sati came down to her dead body and shoultered the corpse over his shoulders and danced in 'Pralaya Thandava'. At this juncture, the Lord Vishnu, the presenting, force of Universe, sent his 'Chakra' to cut down the body of Sathi and redeem the grief of Lord Siva. The Chakra came and cut the body of Sati into eighteen pieces feel in eighteen parts of this 'Punyabhoomi' of ours and came to be known as 'Ashta Dasa Peethas' and out of these eighteen Sri Manikyamba of Draksharama is the Twelfth.

Annavaram is situated 85 Km from Rajahmundry, 51 Km from Kakinada and 85 Km from Rajahmundry. It is famous for Lord Veera Venkata Satya Narayana Swamy temple, situated atop the Ratnagiri Hills on the banks of the river Pampa. A unique Yanthra based on Tripad Vibhuti Narayan Upanishad exists here. The shrine is constructed in two storey, the lower one containing the Yantra and upper one housing vigrahas of the Lord.The idol which is about 4 metres high is in cylindrical form.The base in the lower sanctum represents Lord Vishnu and the middle portion represents Lord Shiva. The image of the deity forming a single idol and representing the Hindu Trinity is of unique attraction.