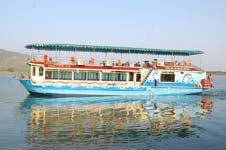 Places to visit in Andhra Pradesh

Papi Hills are fast becoming the favourite destination for nature lovers, enjoys going on the weekend pleasure trip by luxarious boats on the river godavari, takes you into a different world where nature rules in all her glory, untouched by man. One can see the picture postcard prettiness of a hilly countryside patch worked with quaint little farms, a landscape dotted with tribal habitations and river banks densely forested with the timber reserves. Feel the crisp fresh air invigorate your senses and lose yourself in the scenic beauty of the hills and its environs. The pristine waterfall at the quaint village of Perantala Palli and Ashramam is very popular with tourists. Papi hills are three in number, very tall looks like a boundry wall in the middle of river godavari, dividing East, West and Khammam district, is a lovely place whose scenery resembles the scenery of Kashmir (North India). The beautiful scenery of Papi Hills, the waterfalls at Munivaatam, and the peaceful atmosphere at this tribal area give a pleasant look and peace to visitors, making it a special attraction for tourists. The idol of Shiva under serpent shade was installed in Munivaatam. The original name for this hill range was \\\"Papidi Kondalu\\\". Papidi is a rough translation for partition in Telugu. Since this range looks like a well designed partition that splits river Godavari, this name was coined. In due course, it settled for \\\"Papi Kondalu\\\".

Bhadrachalam is situated on the left bank of sacred and perennial river Godavari, about 70 km from Khammam of Andhra Pradesh. Sree Seetha Ramachandra Swamy shrine is most famous temple in country. It is is a sacred pilgrimage for hindus, considered to be one the greatest holy shrines in south India with a very rich and unique historical background. The temple was constructed in the 17th Century by the local Tahsildar Kancharla Gopanna, popularly known as Bhakta Ramadas, a fervent devotee of Lord Sree Rama. housing one of the most famous and splendorous temples dedicated to Lord Sri Rama. The puranic and historic facts relate that Lord Rama long after he had shed his mortal coils manifested himself to save his devotee Bhadra Maharshi whom he promised \\\"moksha\\\" after intensive pepance until tretha yuga was over and Lord Rama, who was an incarnation Lord Vishnu, was back to this original avatar. Pleased by Bhadra\\\'s devotion, he appeared in form of Lord Rama (as per Bhadra\\\'s wishes) and granted him moksha. The Hillok on which Bhadra Maharishi did penance and attained moksha, is called Bhadragiri / Bhadrachalam. Another legend associated with the place is that Lord once appeared in dream of a woman called Pokala Dammakka and informed her about the existence of idols on the Bhadragiri hills. To her surprise she found the Vigrahas on Bhadragiri hills and pu up modest structure. This was origin of the present temple.