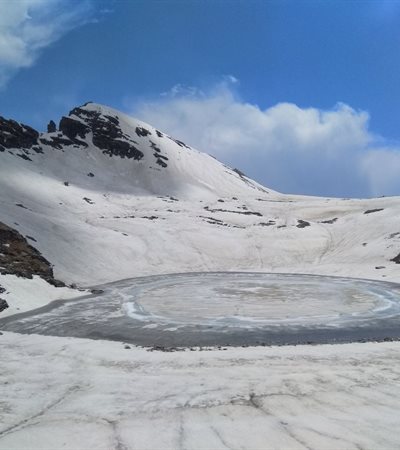 Trekking to high altitude glacial Lakes in itself is quite adventurous and manages to catch the interest of every hiker. Usually these high altitudes lakes are difficult to reach and needs days of hiking and crossing difficult terrains, before the sight of the lake can be cherished. But all these tough complications can be kept at bay with the beautiful Bhrigu Lake Trek in the upper Kullu Valley based in the eastern side of the famous Rohtang pass in Himachal Pradesh. This is ideal weekend hiking trip promising loads of entertainment for both beginners as well as experienced hikers. Nestled at an altitude of 14,000 ft the Bhrigu Lake Trek offers fascinating natural vistas and breathtaking views of snow clapped mountains, lush meadows ad verdant rich forests One of the popular trekking expeditions, The Bhrigu Lake Trek has gain preference due to its unconditional display of natural extravaganza and being one of the easy Treks in Himalayas. People with competent physical fitness can easily enjoy the privilege of hiking to the exclusive lake region even without previous hiking experience. The scenic Bhrigu lake has significant historical and religious implications. As per informations provided by the locals, there is an association of the Lake to Sage Bhrig since the pious soul is known to have perform strong meditation and rituals in the banks of the lake hundreds and hundreds of years ago. Even the locals believe that many Gods of the Kullu valley have dipped in the holy waters of the lake making it sacred for the devotees. The location of Bhrigu Lake is about 6km from Gulaba which is a pictorial village about 22 kms from Manali.Be it the unparallel breathtaking views of Seven Sister Peaks or Deo Tibba and Hanuman Tibba, the outstretched Pir Panjal ranges, the rich line of oak and cedar forests, fascinating green lush meadows, enthralling carpeted alpine flooring or the gushing streams along the meandering trails, the scenic vistas of the region is absolutely captivating which also makes the trekking experience overwhelming. With good luck one can also rejoice the sight of Himalayan Monal, Snow Cocks and the beautiful pheasants. Best Season to visit Starting from Mid May, till the month of October, trekking to Bhrigu Lake is absolutely allowed and travelers can plan accordingly. However the ideal time is before the month of June and after August since this is the monsoon time and there remains the probability of landslides in the region. It must also be noted that the temperature of this place during summers hovers around 20-25C in the daytime and falls to 5-7C at night. In winter the temperature gets lower with 10-15C around daytime and nearly 0 to -7C at night. Almost half a year the lake remains frozen, and travelers can enjoy the sight of snow even during the early summer time.

Kshatra Adventure is a Trustworthy Tour & Travel Agency that is Headquartered in Kullu (himachal Pradesh, India). We Offer a Wide Range of Offers like Tour Operators, Car Hire, Cruise Booking, Houseboat Services, Plan Your Event, and Book a Hotel. Our Goal is to Achieve Utmost Client Satisfaction & Offering the Best Services that Fulfills the Client’s Expectations. with Our Help, Enthusiast Travelers Can Get the Best Travel Deals Without Compromising On Dates and Budget. all Our Services are Pocket-friendly. Read More...